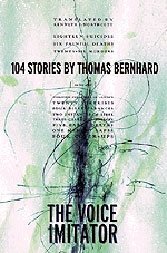 By Thomas Bernhard, translated from the German by Kenneth Northcott

Taken together, Bernhard’s 104 one-page stories can read like a weirdly disrupted pastiche of newspaper reports in which the critical ingredient in any given story has been embroidered just enough to make the ensuing account macabre, absurd or transcendent — sometimes all three. One after another, Bernhard spouts alarmingly lurid tattle tales without betraying an ounce of sentimentality: there’s the Lake Garda Italian who lives with his “beloved,” a mannequin “he met in a Paris shop-window”; the Polish animal tamer who invites a local mayor to cavort with his panthers, which he does, after which the panthers devour the tamer (“Why didn’t the fling themselves onto the mayor … is what the Polish newspapers are asking…”); the nine-year-old Bruges choirboy whose wrong note causes a queen to faint, and a resentful king to decimate all local choirs (“For centuries no sung masses were to be heard in Bruges”); the freezing Austrian farmer and World War II veteran who throws his wooden leg on the fire for heat but dies anyway; the librarian who hangs himself after 22 years service because he can “no longer bear to reshelve and lend out book that were only written for the sake of wreaking havoc,” namely all books; and — in a masterful display of resignation — the speleologists who enter an uncharted cave only to vanish, after which a rescue team also vanishes, then a third, until the Salzburg Provincial Government coolly hires building contractors who respond by walling off the cave.

Bernhard is a deft re-arranger of events who asserts a landscape of suicide, lunatic asylums and state stupidity that reflect the reductio ad absurdum of the day-to-day, as in the two-line story “Care”: “A post office official who was charged with murdering a pregnant woman told the court that he did not know why he had murdered the pregnant woman but that he had murdered his victim as carefully as possible. In response to all the presiding judge’s questions, he always used the word carefully, whereupon the court proceedings against him were dropped.”

Bernhard is a highly trained assassin with no patience for pleasantries, which makes his jagged thinking almost unbearably essential.