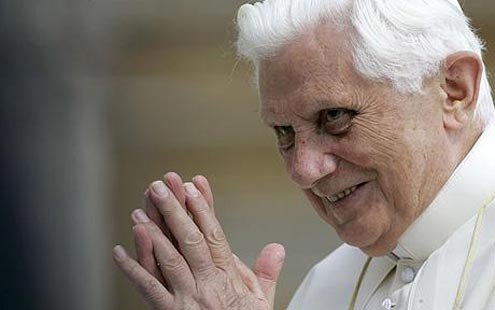 A visionary choice for a man falling from grace, and relevance.
T

here are times when the only way for a major religious figure to make an impact that acknowledges the demands of a fast-changing world as well as his paramount place within it cannot be connected to doctrine. Anyone contemplating such a move knows that breaking with tradition can represent shock therapy, a risky business when it comes to traditions.

But he also knows that shock can contain a transformative dimension. That by changing the way an office and its occupant is perceived may well give the institution in which he leads the means to potentially reacquire the social and spiritual relevance the thinker believes it not only deserves but which it is straying from in part because of his own impotence.

In that sense Pope Benedict XVI’s decision to step down because of old age, poor health, and implied diminished capacity makes magisterial sense. First, it draws attention to the withered impact of the papacy; second, it acknowledges the need to adjust the office to changing times — and adjustment of any kind is usually unheard of at the papal level; third, it spares the Vatican the agony of yet another slow and painfully-observed decline of the kind it endured with Pope John Paul II, Benedict’s ailing Polish predecessor (also a close friend and ally to the former German cardinal).

The pope, who before his elevation was Cardinal Josef Ratzinger, is a consummate insider who watched from close range and with considerable trepidation as John Paul’s health declined over the final decade of his papacy, ending in his 2005 death. The papacy all but came to a standstill during his protracted illness, forcing Ratzinger to be a caretaker to an otherwise distracted administration.

If John Paul II had wanted to resign, long rumored and even hinted at by the pope himself while he was still lucid, at the end he was too addled and stubborn to do so. This gave the Vatican no choice but to establish hero-worshipping deathwatch. Complicit mass media, the watch became an act of voyeurism, a weekly look into physical decline and human frailty. The pitiable images spanned the globe, with the slow collapse of John Paul only undermining an institution badly in need governing refreshment at both its middle and upper echelons.

Now media-shy Ratzinger has done a sudden and remarkable thing. It is as if he were head of a Teutonic corporate entity that had been suffering gradual setbacks as a result of its tired chief’s lack of modern wherewithal and inability to turn over the business to a chosen heir.

In an effort to stay with his company, he does things that do not suit him, including pretending to be interested in (and adept with) the new tools of social networking — Twitter and Facebook, networks used mostly by men and women a third his age. He does so without seeing it as a solution to the larger problem. Or even credible.

Lately moreover (and this he knows well), he has been little more than a sad master of ceremonies in a show focused on damage control, as pedophilia accusations have swept up through the Catholic world, hurting both the Church’s moral architecture and daily credibility.

The affluent, read urban, side of the planet is quick to talk, endlessly contentious, and built from daily snippets of babble largely remote from articles of faith. It seeks comfort in youthful appearances, is mostly ignorant of Latin, is intoxicated by irony, unwilling to dispense with material devices, and generally intolerant of what is seen as outdated. The reverence that once tied age to wisdom, a cultural concept into which Benedict was born, has ceased to exist.

How then is a pope nearing the close of his eighth decade on earth to cope with such vast and disorienting riddles? How should he — as man and leader — deal with the conundrum of extended age, now propped up and prolonged so that so-called “death from natural causes” is often indefinitely postponed? Westerners now regularly linger well past age 90, residents of a nearly invisible half-life. And a pope does not lack for healthcare.

A professional bureaucrat might handle this in the way of a depressive, by falling from public view (something a pope can’t do). A more old-school figure might instead presume it his birthright to die in office and wait stoically for the end — in John Paul’s case bloated by disease, meekly waving to crowds, even allowing his hand to be held up in scenes both moving and pathetic.

But a keen philosopher and thinker — mindful of the links between conscience and the needs of the system to which he belongs — had at his unlikely disposal yet another, more secular approach, and an ultimately unselfish one.

He could pre-empt the known by venturing into the nearly unknown. He could make something real that before was not, or was rare. He could make both the office and the faith he represents suddenly seem flexible, vital, bold, very mortal, and in tune with both the times and the passage of time.

One word is best associated with the simple but jarring choice made by this pope: Visionary.