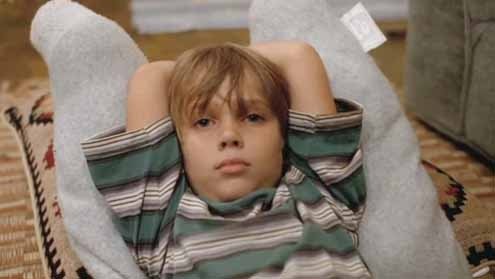 Ellar Coltrane in the movie "Boyhood."
I

was once a mischievously contradictory schoolboy. Sent to a prestigious Washington academy founded by French nuns, I learned English but little else. In first grade I found arithmetic offensive and refused to add or subtract, let alone divide. Things worsened the next year when I was called upon to multiply. This I considered repressive and schemed ways to fool my teachers.

I developed a kind of innocently aggressive denial, which consisted of tearing out whole pages from schoolbooks to then pretend they’d never existed. I explained unreadable homework in terms of subversively leaky faucets that sullied my otherwise pristine pages. Late into second grade, Mrs. Jackson decided that my home had far too many faucets and demanded I stay late to do my homework, or else.

I chose or else, often sobbing or screaming at my mother, who tried to help, or remaining impassive as my father tried telling me that telling the truth mattered, as did school. Nothing worked. When Mrs. Jackson called me to the blackboard to solve a multiplication problem I stood with chalk in my hand as she waited silently for 10 minutes before dismissing me. The class snickered. It didn’t matter. Resistance had become my purpose.

During a second grade soccer match I kicked a spiteful own-goal in a game with a private school rival. Major Hyde, the coach, glared at me angrily. I was self-destructive, he said.

These memories rose from the dead hearing a distressed friend discuss the rampant antics of his second grade son, and the efforts to “fix” him. He has “mind issues,” the father told me. He cannot manage his anger. He will not do homework. He broods or sulks. He has no steady friends. He views parents and teachers with sullen hostility. He feels superior to surroundings that in fact terrify him.

This boy in the now could have been me in the then.

With a critical 21st-century difference. He possesses at least two working diagnoses, both ADD and now ADHD, and a third I can’t remember, diagnoses I was told “help him feel better about his problems.” He’s also taking pills, now known as meds, to dull him against panic attacks, anxiety disorders and depression. Though he seems to have improved, his father says some of his (too) gregarious curiosity has faded in response — hardly surprising.

As my second grade year plummeted and my anti-establishment machinations grew more resilient, I was sent to a child psychologist. To vex him, I stole objects from his office. I was branded “troubled” child best sent to reform school. A second therapist concurred. This was joyous news to my private school, already on the verge of expelling me. But my father acted first. He set aside doctor caution and moved me from the private school to a nearby public one.

It was a grandmaster’s move. In public school, my antics went unnoticed. I was the skinny new boy. If I wanted to play with my classmates I had to earn my place. If I chose to sulk, that was my decision alone. Slowly, my Roi Soleil universe came undone. I was no longer at the center of all around me. If I failed to do good work, I’d also fail the grade. No one cared if I insisted on playing the role of put-upon outcast. I quietly realized my private school theatrics had lost their charm. In third and fourth grades I began doing my homework regularly. I multiplied integers for fun. I struggled to play kickball and softball because I wasn’t good enough, which unsettled my sense of worth and made me want to improve. In the fifth grade I finally hit a baseball a long way (for a tiny boy) and those who’d heckled me as a Winner-the-Loser stopped doing so. Step by step, the church of the one became a congregation that included the many, establishing the moorings of a values system.

In all this I never took a pill, never had the chance to embrace a suggestive diagnosis, never heard the words “special needs.” I was a typically unsettled boy — growing up can be hard — left to adjust or fail, and ultimately boosted by a father who understood private school pretentiousness brought out the worst in my own. I never became a parent and boast no special insight. Except perhaps to say, “let boys be boys” — within limits — since boyhood is made from high theater and overwritten dialogue. Refrain from worrying too much about a boy’s fear of failure and failure itself. Blotting out or medicating away the anxiously imagined sense of the abyss can make a “repaired” child less able to face the starker perils ahead, most of which he’ll need his boyish enthusiasm to overcome.