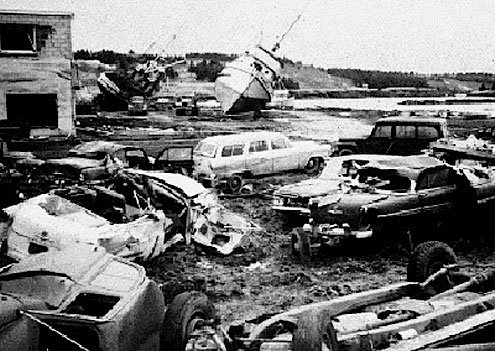 The towns had exotic names: Chitina, Glennallen, Homer, Moose Pass. There was even a town called Hope. It lasted four minutes.
T

His usual name — “Wheelock The Idiot” — wore out its welcome when he said that strange thing under the telephone pole.

“Last one up gets electrocuted,” shouted Tony, who clenched and pumped his fists as if to tease out his musculature. The idea of electrocution made us laugh aimlessly.

It was then that Wheelock told them he could feel the earth move.

Wheelock was Canadian. “It was always really cold on my birthday,” he said. He told stories about Alberta, about Saskatchewan. No one could spell the place he talked about.

“Are those your pussy sisters, Albertie and Sassie?”

Tony’s sham revved up the group. One by one, they shimmied down from atop the pole. Splinters made some of them whimper.

“I can feel the earth move,” Wheelock said again.

Wheelock’s father was a contractor who built dams and dikes. Built them, he said, to withstand big ice in winter. He sounded silly, like a movie comedian. Gets mightily frigid in Canada. Makes your bones bust.

On Saturdays, Tony assembled the group under a big rock known as “the cliff” — just a mass of weatherbeaten shale overhanging a meadow in the Rosedale estate. There, they smoked L&M cigarettes and shared secrets about school and monster movies.

Others would feel up Betsy Caledonia, who was 13 but had the pellucid skin of an infant. She’d get a dollar for each boy. She’d lift her blouse for a quarter. Tony dared me, but I fled. “You got little hands,” shouted Tony. “She’d never know you touched her because you got those tiny little hands.”

The group, a baby mob, would then turn to more ambitious tasks, heckling shoppers in the aisles of the local supermarket, for example.

Wheelock said that in Canada the earth stood still, or did mostly. “It’s not like Alaska or Persia or place in South America or under the sea,” he said.

“It’s not like volcanos or China or places we don’t know anything about.”

Earthquakes, he said, were bigger than anything we could ever imagine.

Tony had once shoved Wheelock at Betsy. He tricked him to Rosedale, taunted him, pulled at his blue-checked shirt until the tails spilled out of his pants. Betsy smirked, but her upper lip twitched inexplicably. “Don’t…” she said. Wheelock sobbed. They didn’t seem like strangers.

When Betsy Caledonia bothered coming to school, which wasn’t often — “problems at home,” one teacher whispered — she’d apply pink lipstick at her locker. She’d also practice a checkout-girl pout to a mirror the size of a safety razor.

“What are you looking at?” She caught me. My locker was across from hers.

The lipstick, I said (but there was also a magazine with a winking model on the cover). “Want some?” She held out the lipstick.

Once, when Betsy’s short skirt distracted us from hexagons, Mrs. Keane, the geometry teacher, called for a public measurement. Rules were rules.

Betsy knelt before the blackboard as Mrs. Keane — struggling to squelch the giggling — pressed the wooden ruler to her thigh. Only then did Betsy grab it and slide it up her dress.

We agreed Mrs. Keane’s wild shriek was most like that of the scientist’s girlfriend when she’s confronted with the pulsing blob in the storm drain. “Betsy Caledonia — out, out, out of this classroom immediately. Now, young lady!”

Betsy smirked, led the ruler fall to the floor, and walked out, leaving her books on her desk. Wheelock retrieved them.

Wheelock got the shakes almost every day. His right arm trembled. No one knew why.

But nobody did. We said nothing.

“See these cracks,” said Wheelock. “These cracks are the way it gets when the earth expands over time. No matter how hard you make it, cracks. Always cracks.”

We walked our bikes in the alley. Wheelock struggled with his balance. He never rode. The heat made his hands smell. He did the dishes at home.

“Why does your arm shake,” I asked him.

“Is there a cure?

“The muscles get bad.”

“Is that why you feel the earth move?”

One day Wheelock’s father came for us the alley — he looked like a bull, his back arched forward. “Get in here,” he snarled, struggling to keep his balance, a small glass in hand. “Come and see the news I have for you. And you think you’re such a know-it-all.”

Wheelock said later he’d never touched her. Ever. He couldn’t, wouldn’t. He never saw it coming. Not this time.

We read about huge waves, about land breaking away. Many towns had exotic names: Chitina, Glennallen, Homer, Moose Pass. There was even one called Hope. The whole thing lasted only four minutes.

But Wheelock never came out — for anyone. His father kept him locked up for days. At first, he said nothing. A long time later, he’d only apologize.

Christopher P. Winner’s email address is cpwinner@theamericanmag.com. This is the second essay in a summer series on 1960s youth and adolescence spent in Washington, D.C. and Western Europe.