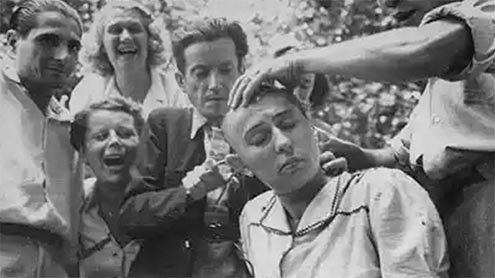 Throughout postwar France and Italy, women who collaborated or communed with the Nazis had their heads shaved by vengeful crowds.
J

ust after the end of World War II, France and Italy slipped into gruesome internecine violence. Much of it occurred in the hinterlands and went unreported. Urban incidents were excused to pent-up rage. The vendetta-style brutality was simple in origin. Resistance fighters who had died by the scores resisting wartime occupation went about settling accounts with those who had collaborated with Mussolini’s Fascists and Hitler’s invading Nazis.

Justice was suspended. Reprisals were summary. Humiliation was vital to the punishment protocol — including shaving the heads of women who’d slept with the enemy. The avengers were enraged, determined and pitiless. Their intent was settle scores at any cost.

This near-feudal bloodletting went on for several years, before the postwar governments of Italy and France got their sea legs and the rule of law again began finding its place in the two ruined societies. By 1950 the butchery had largely abated.

Something of the sort — albeit at a different level — is now happening in the United States. The ascension of Donald J. Trump, an almost casually vindictive figure, has opened the doors to those eager to take verbal and legislative revenge on new-age collaborators — liberals, progressives and smug politicians — who in the view of the aggrieved occupied Washington against the will of a far larger force, the so-called “American people,” who, like World War II partisans, spent years loathing both occupiers and collaborators. Atop the latest vendetta list is big-city mass media, for its collaboration with hated liberals and because it now criticizes a new order whose leaders insist they’re beyond reproach. If he could, Trump would shut down select newspapers and shave a few heads of his own. That’s not possible — yet.

What is possible is the adopting of scorched earth language that puts a premium on what the new leaders disdain, will not tolerate, and will work to exclude — as always in the name of the American people. This they call straight talking when in fact little of it is at all straight, let alone informed, its tone reeking instead of reprisal.

In Italy, those who opposed fascism were known as partisans. Some were Communists, others Catholics. Though ideologically separate, they deplored the dictatorial scourge. That they were called partisans is important. They took part in a cause.

Trump’s people imagine themselves as the new partisans out to rectify years of awful wrongs and political “crimes” committed against the suffering people of the United States of America. They are anointed crusaders in a so-far peaceful civil war. Except that there were no crimes, only an eight-year presidency by a man the partisans learned over time to see as a charlatan occupied and hate many times over. Now, their dismantling of what he stood for exudes the same passion that infected those who spared nothing to root out traitors after World War II.

Madness is the word. It’s madness rationalized by a vision of an America under siege by a largely fictional set of horrors, threats and conspiracies. It is wartime head shaving in a peacetime environment. Gullibility is high, swiftly allowing allegation to acquire the heft of fact. The vengeful are eager to participate in the rush of excitement that accompanies the settling of accounts.

Europe’s postwar vendettas took on a momentum of their own as villagers cheered the summary execution of collaborators. Many innocents died on the basis of innuendo spread by those who saw opportunity to rid themselves of an enemy. The feral and villainous side of human nature ran amok. People pleaded for their lives but stood no chance. The desire to purge was gratifying enough to suspend the cumbersomeness of compassion, morality and legality.

Though Trump’s legions wear business suits and ties, they are agents of the feral. They entertain revenge as a matter of pride. They are wanton, on the hunt for collaborators, who, like Joe McCarthy’s Communists, are everywhere you choose to look. They cannot be policed because they are the police.

Just less the 100 years ago Benito Mussolini met my father at Palazzo Venezia. Mussolini pointed to a map of Europe, the Balkans and North African and drew an absurdly great circle around Italy’s sphere of influence and power. Never mind that the Roman Empire had vanished. Now, Trump points to smaller crowds and calls them immense, turning dismissive and resentful toward anyone who contradicts him. Mussolini ended up on a meat hook in a Milan square. Trump risks no such fate, but he is determined to tempt it, in the meantime ensuring he roots out and slays as many collaborators as possible.