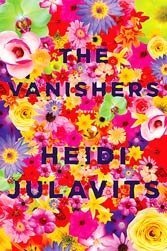 If genetic engineering could fuse the Paul Auster of old with a postmodern feminist, you might be reading this: crypto-pop fiction to suit irony addicts. Auster’s novels once hosted haunted New Yorkers and neurotic ghosts. Julavits in turn has a penchant for spirits, psychics, and energized kitsch. This time around, she points a lampooning finger at the most intimate weapon of mass destruction, namely the “psychic attack,” a kind of subliminal woman-to-woman character assassination. The hapless victim falls all-systems ill, is preyed upon by the pharmaceutical industry, and spends most of her “free” time wondering what it means, “to be sickened by an illness known as you.” Murder-by-psychic assassination is the latest weapon on a catty planet in which unhappy matriarchs and their offspring perpetuate “pointless, self-defeating rivalries” as a kind of surrogate suicide.

The victim-narrator is Julia Severn, a twenty-something student of the (liberally) occult arts besieged by one Madame Ackerman, her weird and envious medium-cum-mentor, apparently because Ackerman and Julia share a to-be-determined-later connection to a French propaganda and “feminist” porn filmmaker named Dominique Varga (“the Leni Riefenstahl of France”) who may or may not have counted Julia’s mother Elizabeth as an acolyte. And what happened to Julia’s mother? She killed herself, naturally. Or did she? The title may suggests otherwise, since here’s a world in which suicide’s alternative is professionally engineered vanishing, a kind of corporate alternative to actually taking your own life complete with coordinators and videos. Take that, Sylvia Plath!

Make no mistake: Julavits is a dreamy writer; so talented she can overwrite wildly to suit parody’s elastic appetite. She runs riot over the foibles of iWorld culture. You name it, she mocks it, including assistants (“authorized context providers”), self-involvement (“Acquired Situational Narcissism”) and closure (a form of hygiene). Last but not least, she tosses in spiritual midwives to help tease out “the fetal remnants of bad pasts…”

In the end, though, the backstory story is little more than a comic lost-and-found, a cosmic send-up of 21st-century girlfights most foul. But even mommy-finding has its limits. When the pixie dust settles, all you’ve been fed goes “poof.”