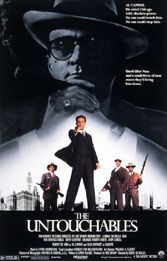 David Mamet’s crisp script, Brian De Palma’s layered direction, the star power of Kevin Costner, Sean Connery, and Robert De Niro — this is a well-oiled machine. Costner is Eliot Ness, the man who went after mobster Al Capone (De Niro) in Prohibition-era Chicago. Connery, who steals the movie, is Jim Malone, his reluctant Irish cop advisor and lieutenant. Maverick Treasury Agent Ness arrives in the city determined to scrub away the scum. Both bribe-ridden local authorities and Malone, the movie’s moral arm, are skeptical. But Malone’s team (including Andy Garcia and the delightful Charles Martin Smith, an accountant) begin causing Capone headaches, which he transmits to one of his flunkies courtesy of a baseball bat.

History can whine that the actual Ness and Capone were far more plebian and ambiguous, but this is fearsomely confident Hollywood stuff determined to play by its own rules. De Niro struts his stuff and De Palma gets in a climactic homage to Eisenstein’s “Battleship Potemkin.” Rousing stuff.