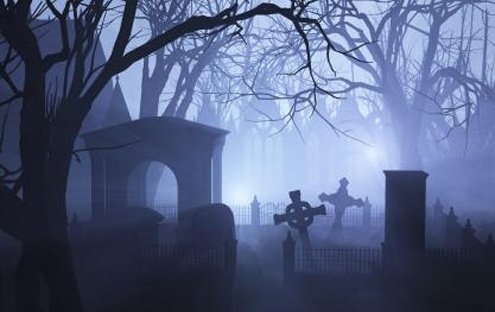 The 19th-century legend of the Bell Witch, while focused in Tennessee, extends to Mississippi.
H

alloween seemed as good a time as any to revisit the past with Adam. A native of nearby Oxford, Mississippi, Adam was visiting us from New Orleans — where he lives — and getting nostalgic for his old stomping grounds.

Our home in Water Valley, he told us, was also where he and his high school buddies once hung out — on the “cool kids” side of the old-style Sonic Drive-in parking lot. The girls were different out here in Yalobusha County, Adam explained. Maybe they just were excited to see big-town kids.

So there we were on Halloween night, the three of us cooped up in our small and fuel-efficient Honda Civic, enjoying our milkshakes and sundaes while musing on the flirting teenagers in their pick-up trucks and reliving Adam’s glory days. This time, none of was among the cool kids.

As we lost interest in rural teenager mating rituals, Adam suggested we go on a ghost hunt. Another reason Adam once headed for Yalobusha County, he said, was to haze fraternity pledges. Every Halloween, his fraternity sent pledges to the cemetery where the Bell Witch is allegedly buried.

My wife Sarah did some graveyard research as we drove, shouting out her findings as I played “Ghostbusters” and “Thriller” at full volume to get us into the Halloween mood. The 19th-century story of the Bell Witch is contradictory: some historians say the witch is buried in Tennessee, but that one of the victims of her haunting — Elizabeth Bell — moved to Water Valley to escape her and is now buried in Long Branch cemetery. But ask around Yalobusha County and everyone insists it’s the Bell Witch herself that’s six-feet under not far away.

Wherever she is, the ghost of the Bell Witch still gets the blame for odd happenings in Water Valley 200 years later. The witch apparently still scares our animals, pinches faces and pulls people’s hair, opens doors, and makes noises, tormenting Water Vallians just as she once did poor Elizabeth.

Figuring we could tolerate a mild haunting, we boldly plowed ahead. After several turns into the rural backwoods, we found the graveyard gateway. We parked next to a large magnolia tree whose branches reached low to the ground under the weight of its leaves. Adam and I climbed out, flashlights on, but my wife Sarah chose to stay in the relative safety of the car. We heard the doors lock once we we’re out.

The grounds extended away from the road toward a thick forest. The gravestones were worn down or toppled over and cracked., “It’s probably because of those damn college kids. No respect,” Adam smirked.

Suddenly, a roar and bright lights flashed up behind us. A large red truck spun into the cemetery, circled the magnolia tree, and pulled up beside our car, country music and fasten-seatbelt chimes spilling from the truck’s cab. The driver let the engine run for a while, then shut it off. A pause. A door opened and someone emerged. Getting closer, we could tell by the smell of cigarettes and whiskey that this was a man, not a ghost. The underside of his admirably round stomach peeked out from his shirt, slowing his descent from the tall truck, after which came a period of heavy breathing.

“Y’all here to see the wiiiiiiitch?” he finally said, in wonderful Mississippian.

“No, sir,” I said in my deepest voice. Adam chose not to respond.

“Well arright then. They come by here sometimes ‘n mess with them graves,” he pointed outward towards the prone markers. He stared at the two of use again, and continued: “I live right here ‘n jus’ make sure no one comes ’round here on Halloween makin’ trouble.” He looked at us one more time. Curiosity had gotten the best of Sarah, who emerged from our car’s protection and joined us. “C’mon I’ll show y’all where she is. But firs’ you gotta unnerstand sommin’: why would you ever bury a witch with the res’ of the Christians? Y’all are lookin’ in the wrong spot.”

He pointed down into the darkness, back toward the trees. “You’re gonna hafta find her in th’other cemetery.”

We hesitated but decided to follow the stranger towards the pitch-black forest at the other end of the cemetery, wondering what the “other” cemetery could possibly mean. There we found a small pathway that cut into the branches and led to an archway carved from the thick foliage. Next came a clearing where our flashlights revealed five rectangular stones pushed flush into the dirt.

“Y’see? ‘Un of these is hers. They didn’t want no witches ‘r slaves up in the cemetery,” the man said, a hint of insider pride in his voice. “I found these coon huntin’ back when I was a kid. Got loss’ n’ had to spend th’ night in this clearin’. When I woke up, I foun’ these. Used to have names on ’em.”

We stood there silently for some time, uncomfortable both with the legend of the witch and the history of the bodies — American slaves — lying beneath our feet. A Halloween that had begun with a memory lane trip into Adam’s late adolescence had taken us much further back, to a more humbling kind of haunting. Mississippi’s darkest history is never far away from its modern residents, always ready to remind them that it’s there.

As we drove back home, we sat in silence. The songs we’d been listening to described the wrong kind of spirits. The ones we encountered deserved a new respect, a new song, a new burial place, and a new memory.