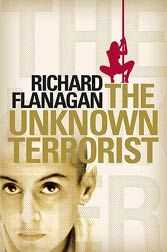 Nothing subtle about Flanagan’s post-9/11 world. Everyone lies. The big, bad Australian state falls into cahoots with the phony media to embellish a terrorist threat. The powerful (a word Flanagan can’t get enough of) do nothing but dupe and deceive. His narrator is Sydney lap dancer Gina Davies, nicknamed “The Doll.” The Doll is on the run after sleeping with an Arab man named Tariq who may or may not be behind a Sydney Olympic Stadium bomb plot.

Decent people are few, sincere relationships rare, the rich and powerful Orwellian, TV a huckster’s medium, and police out of touch with justice. The “new gods” — “spinners,” “shock jocks,” and “op page parasites” — “play with the fate of mortals, pointing shadows of fear and hate on the wall to keep everyone in the cave.” The Doll’s odyssey is a romp through a society that needs terrorism as a surrogate for lost idealism (“the terrorism question had become a fad, like body piercing or flares,” says The Doll). OK, OK, but even screeds run out of steam. Character must subdue generalization to persuade. But persuasion isn’t Flanagan’s thing, nor is verisimilitude. Instead, he’s written a corporate-bashing book inhabited by quacking caricatures. It’s maudlin, moralistic, and finally dreadful.