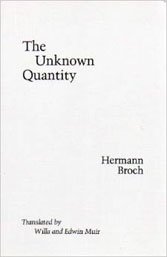 By The Unknown Quantity, translated from the German by Willa and Edwin Muir

Set in 1927, Austrian businessman-turned-writer Hermann Broch’s novel focuses foremost on Richard Hieck, an awkward young mathematics instructor who works in an observatory; his peevish little brother Otto; their “night-dark” widowed mother Katharine and almost ludicrously devout Catholic sister Susanne; and finally Karl, a needy friend of Otto’s whose presence in the story will turn life on end. Portly Richard, “sunk in the phantom of his ego,” is a gifted academic who compelled to play deferential second fiddle to his more distinguished peers, all the while fretting over what matters most, the rational physics he lives for or the uncontrollable pull of family and love, including erotic love, which he cannot fully fathom.

The Modernist movement, to which Broch belonged, sought to banish a specific kind of gratuitous sentimentality by insisting on the inextricable sadness located at the human core (“loneliness, rung in the heart…”) Mitteleuropean writers were particularly at home with the form because they’d become profoundly convinced that neither enlightened thinking not scientific advances could banish the melancholy truth of life’s disappointment, let alone erase the mortality at the end of all known tunnels. World War I and social fraying proved their point.

This was all the more the case with Broch (1886-1951), an idealistic Jewish textile manufacturer who remarkably overhauled his life first by converting to Catholicism (a choice based on marriage) and then by dropping his commercial interests midstream to study mathematics and psychology. He came to his writing career only in his mid-40s.

Broch elegantly mingles Richard’s interest in the spiritual with a sense of probing that goes deeper still: “Does space breath?” He manipulates the tension and universal anxiety that animates Richard’s reflections while including “lesser” figures whose behavior undermines any absolute truth about how people behave — “amazement, tempered with hatred, at the volubility of the human race.” He exalts reason but is attracted also to feeling (“… in the heart there are no statistically approximate values, there the law is valid, and that is all there is to say.”) Of all German-language writers of his day, the compassionate Broch is the most like Graham Greene in English: grounded in the known world while devoutly attentive to “the regions of the attainable,” where the essential is “inexpressible.” He takes the poetic soaring of Ranier Marie Rilke and gives it a prose compass.