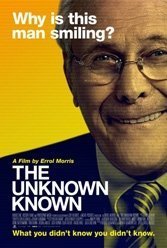 Fascinating doesn’t begin to cover the peculiar chemistry conveyed by Donald Rumsfeld. In Errol Morris’ smart if annoyingly manipulative documentary (Berlin choirs swell incessantly), the former defense secretary, longtime Republican Party insider and Iraq war architect comes off as a glib and detail-oriented opportunist who believes (with exacting fatalism) that calamity — with 9/11 as the natural centerpiece — is destined to befall nations short on imagination, which failed the U.S. ahead of the attacks. This smart observation is undermined only by the sense that Rumsfeld himself is too self-absorbed to possess such a gift.

He presents himself as a smirking riddler and memo-man unapologetically love with the sound of his own voice (and words) while at the same time intrigued by that which his practical side struggles to fathom: namely “unknown knowns,” what you don’t know you didn’t know, a totality of misty intuition no one thinks to focus.

Morris has Rumsfeld read excerpts of his memos (he called them “snowflakes”) to shed light on his dubious Iraq recommendations, which led the United States into a war to depose Saddam Hussein. He also digs back to Rumsfeld’s days alongside Richard Nixon, Gerald Ford, and Ronald Reagan. Each biographical layer further fleshes out a brilliant, expedient figure that is half-Cheshire cat, half-double talking sphinx: witty, charming, and alarmingly self-assured.

Sent to the Middle East as a Reagan envoy in the 1980s, he writes of the Middle East: “The only things I see as lasting are blackmail, conflict and killing.” True. But pressed on Iraq’s weapons of mass destruction, semantic deflection intervenes: “the absence of evidence is not evidence of absence.” Eloquent circumlocution is the norm.

Unlike Robert McNamara, a previous Morris interview subject (and former defense secretary), Rumsfeld is uninterested in second-guessing, self-criticism or regret. He seeks wisdom in abstraction only to conclude it’s impossible to acquire. Would it have been better to stay out of Iraq? Morris asks him. “Only time will tell,” responds Rumsfeld, who’s in trouble only on the few and telling occasions when he’s at a loss for words.