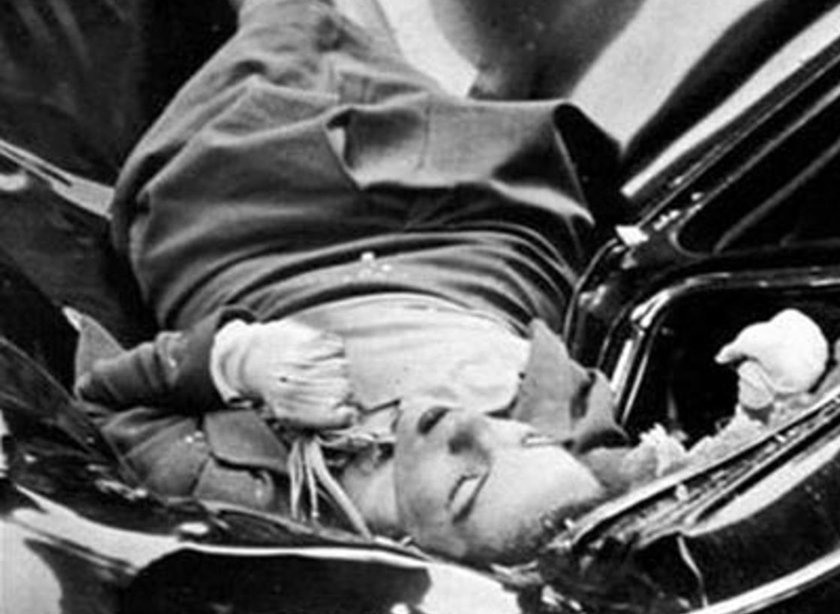 Fatal beauty: A detail from Robert Wiles's photo of 23-year-old Evelyn McHale, who jumped to her death from the 86th-floor of the Empire State Building in May 1947.
S

eeking refuge from the bullying perils of adolescence, I often retreated to my outpost on high, the top of a telephone pole in our backyard alley that was easy to climb because of its rungs intended for workmen. At the top were two gray boxes on which I could cushion my back, before extracting the 8×24 binoculars I’d received as a birthday present.

In the daylight hours after school I would sit up there in my Confederate cap, proof of my rebel soul, and look at rooftops and streets all around. Few if anyone noticed me, and those who did were less likely to call the police than be pleased I was not a more aggressive kind of juvenile delinquent. More to the point, I was small thing, and out of their reach. At worst I was a disturbed Confederate infantryman who didn’t yet know the war was over.

It was not over to me, since on the neighbors’ roof three doors down were three menacing black cats, and on another roof a hive of bumblebees that seemed entirely uninterested in the fact they terrified me whenever one or two moved close.

There was also a green Dodge sedan, a terrible color for a car, with a dented roof that looked as if someone had fallen on it from the upper floor of a skyscraper. This image came to mind since my father had shown me a book of cover photos published by “Life” magazine, and on one of them was a shot of a woman, perfectly poised, who’d leapt from the Empire State Building and managed to land in such a way she resembled a sculpture of some strange sleep, not death.

At worst I was a disturbed Confederate infantryman who didn’t yet know the war was over.

I thought of the image often and wondered what would happen if I fell from my perch and was discovered by some cameraman. As a dead Confederate soldier in an alley, I doubted he would have decided I was worth the trouble to photograph. Also, I had nothing so quaint as a car to land on.

I was not a voyeur. People did not interest me as binocular subjects. What if they looked back? And what if I saw something terrible and was pushed to act.

This was my worse fear: of being compelled to do something. I wanted instead just to be there, alone and away from the madness of adults who always seemed sure about one thing or another and sought to impose that sureness. I instead was sure of nothing, not even the feasibility of my own existence in a world in which adults, or at least those around me, spoke incessantly of the potential for nuclear world war. Their dread was at once amusing but real and one man two streets away had taken to building a bomb shelter in his back yard, advising all those he saw in our neighborhood to follow suit. War was around the corner. No dread was premature. Against dread one needed lots of tins of crackers and soup and a strange gray mask against contamination if, for any reason, leaving the bunker was called for.

This man at times actually walked down his street wearing the mask, apparently to make his point to neighbors and skeptics. I spied him one day just up the street with his mask hanging off-center, as he’d decided to take it off but then thought the better of it. It hung near his jaw and bobbed as he walked his dog. Franklin. I wondered what would happen to Franklin in the bunker and if they’d survive what all called the nuclear winter.

Over time, the bunker man became the subject of a great deal of thought, and some melancholy since I didn’t want to be stuck in a bunker with a mask and only soup and biscuits.

This bothered me so much over time that I told my father about the man, not mentioning my telephone pole spying.

Against dread one needed lots of tins of crackers and soup and a strange gray mask against contamination.

“It’s an exaggerated act, and useless,” my father said, speaking to me not as a boy but as a Confederate infantryman familiar with the language of adults. “If there is a war all will die, and bunkers will not be enough.”

“But what about the mask?” I asked.

“That is like wearing a mask against a contagious disease,” replied my father. “It’s all well and good but at some time you must take it off. You cannot hide away from invisible threats. You can only pretend to do so to feel safer, so the man has his mask and his bunker.”

This seemed a sane enough approach at the time, convinced as I was I’d survive anything while wearing my cap and on alert at the top of my pole, its big brown roundness something of a comfort, like a tree no one could knock down.

No one could dislodge me by force, I told myself.

Up there, in my realm, I was untouchable. My mistake, in the end, was coming down for good, and now the man I once saw is everywhere around me, a population of such men, all lined up for biscuits, afraid of the shadows cast by others, walking the Franklins of the world in haste, and waiting for the peril to pass out of mind. If only they knew that once instilled, particularly in a young rebel infantryman, it never does.