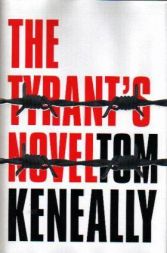 How do you approach Saddam Hussein by way of Orwell without giving up your virtue? The answer, for “Schindler’s List” author Keneally, is cinematic conceit: an asylum detainee called Alan Sheriff (not Omar Sharif) faces repatriation to a dreaded Middle East homeland ruled by “Great Uncle” and policed by the, um, “Overguard.” It’s time for Sheriff to own up. Under duress, he explains, he was ordered to write a novel that would make the vain Great Uncle a literary star. All went awry and he fled the country an… oil barrel. Heavy-handed isn’t the word: thick, maybe.