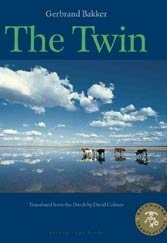 By Gerbrand Bakker, translated from the Dutch by David Colmer

Middle-aged Helmer van Wonderen lives on a small milk and livestock farm in rural Holland where he reluctantly tends to his crusty, terminally ill father. Emotionally terse, Helmer is still haunted by the death of his twin brother Henk in a car accident when the two were teenagers (“We were two boys in one body…”) Out of the blue, after decades, Henk’s widowed fiancé Riet, reappears on the scene. She’s wants her recalcitrant teenaged son to work on Helmer’s farm in an effort to reopen a link between the then and the now. Alas, she named her son Henk to honor her one-time lover. Worse still, her Henk is the same age as twin Henk the year he died. Obsessed by the past, and curious, Helmer agrees.

Young Henk’s arrival gives “half a grown man” Helmer means to mull over two deaths, that of his twin, whom he sees as his better, never-realized self, and that of his disliked father, which looms like lead over the day-to-day. Helmer knows he was always his father’s “second choice” in all things.

Bakker’s muted but riveting debut novel is in marvelously smaller than life, as if to give Helmer’s insecurity a natural volume, a kind of quiet, middle-aged clamor that emerges through routine. Sheep and goats and crows and milking rituals at once conceal and celebrate unease. Unmarried, solitary Helmer is desperate to figure out how he fits into life; if in fact he fits in at all. He’s desperate to believe he survived his twin’s death in any substantive sense.

Bakker story is tenderly and painstakingly fleshed out. A gardener by profession, Bakker has a writer’s rare gift of sculpting absence, giving melancholy a palpable identity without ever giving it full right of way.