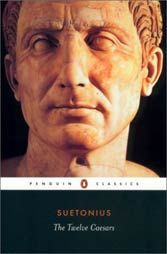 By Suetonius, translated from the Latin by Robert Graves

here’s a reason why Suetonius’ “The Twelve Caesars” is a classic: it’s the closest you’ll ever get to a real life Roman emperor. From Julius Caesar to Domitian, a span of about 200 years, Suetonius reconstructs the lives of the famous and infamous rulers of Rome using eye witness accounts, private letters and extensive library records. Suetonius, writing during Hadrian’s reign, cuts to the meat of some of the most powerful rulers in history.

Their respective histories and military glories are explored in depth, but the allure of this book is the gossip of their sexual exploits, murderous appetites, questionable daily habits, and weird-ass quirks.

For example, Claudius enjoyed gassing it up so much that he wanted to pass a law allowing obstreperous flatulence in public meetings. Also, for those shrinks to-be out there, the importance of auguries is fascinating. If you’re interested in Rome or Roman history, this is a must-read.