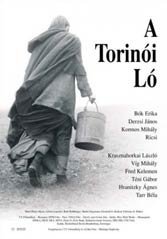 At once infernally and magnificently deliberate — the perfect paradox — Bela Tarr and Ágnes Hranitzky’s “A torinói ló” is a monument to the uncompromising vision of Hungarian novelist (and Tarr co-conspirator)László Krasznahorkai, a writer whose widely imaginative life’s work exalts the stubborn if driven frailty of the human condition.

In late 19th-century Turin, an aging hansom cab horse is whipped in plain sight. Central to the opening narrative is that philosopher Friedrich Nietzsche witnessed the event, dashing into the street to hug and protect the animal from the onslaught. Afterwards, Nietzsche lapsed into a mental collapse from which he never recovered.

But what of the horse? Here, Tarr channels Krasznahorkai to fictionally reconstruct the life of its owner, Ohlsdorfer (János Derzsi), before the event. He lives cosseted in a Middle Ages-style cottage in the rural countryside with his laconic daughter and is gradually becoming aware that the aging animal, the source of his livelihood, will no longer be able to provide for the pitiable twosome’s daily needs. The two characters and a lone visitor are like creatures imprisoned in a black-and-white nightmare that submits only to nature and refutes all sentiment.

Delving into Nietzsche, Krasznahorkai pieces together a jaggedly dark prose poem that Tarr delivers by adamantly follows the daily tedium of father and daughter, whether the act is the boiling and devouring of potatoes, tending to the stable or meeting rogue gypsies. Outside, a gale refuses to let up, syncopating a view of life as a relentlessly harsh continuum. The beating that will ultimately devastate Nietzsche, the father of the “Übermensch,” is, for those caught in the folds of its prequel, no more than an outcropping of misery.

Tarr has said the film is about the “heaviness of human existence,” but it is a particular kind of human existence, bitter by rote. In many respects, this is the waking antithesis of all that might be considered conventionally entertaining, which makes it all the more ambitious and poignant.