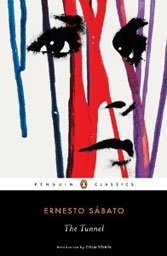 By Ernesto Sabato, translated from the Spanish by Margaret Sayers Peden

Though far less well-known, Sabato’s unsettling novel is as potent an existentialist manifesto as Camus’ “The Stranger.” Argentine Sabato (1911-2011), a physicist-turned-writer, struggled to find a European publisher until a French magazine, encouraged by Camus himself, finally agreed. Praise soon came Thomas Mann, Graham Greene and Camus himself, all of who to some extent shared aspects of his bleak but shimmering life view.

The story is that of a 38-year-old Buenos Aires painter, Juan Pablo Castel, who opens by confessing to having murdered a younger woman, María Iribarne. The rest of the manic, confessional volume is spent explaining how he met her, grew obsessed, and how that obsession was gradually transformed into an inner, then outer rage.

Castel’s is a detective into his own crime — the perfect amalgam of “hatred, contempt and compassion,” action as obliteration. His love for María is so obsessive that he invites himself into a “personal hell of analyzing and imagining,” one that yields the classic existential paradox: a purposeful life whose dead-end machinations have no escape hatch, no release valve. Life is “miraculous, dazzling” or “somber, cold, devoid of reason,” absent neutrality or social breaks. Castel is an anti-hero determined to make paranoia serve his ends, no matter what the cost.

Sabato emotional pacing is exceptional, his sentences operating like drill-bits at different speeds. Castel’s uneven passion is met with María’s mysterious cooling ice. Love produces first desire, then jealously, and finally rage. “Dear God,” asks Castel, in search of a connection between beauty and evil, “how can you have faith in human nature when you think that a sewer and certain moments of Schumann or Brahms are connected by a secret, shadowy, subterranean passageways,” a passageway that Castel seeks but is unable to find.