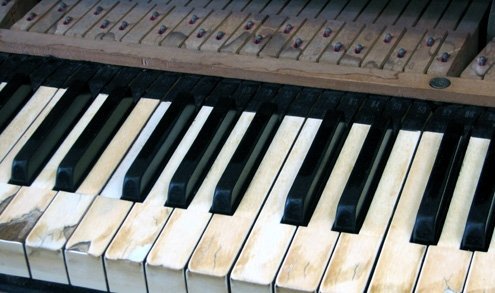 Once he's tuned a piano he knows it intimately. He doesn't forget it.
A

month ago, when I phoned the piano tuner, his sister said, “He won’t be tuning any more. He had a heart attack.” When I said I was sorry, she replied, “Not as sorry as I am. He’s 80 years old. He’s overworked. Pray for us but don’t call here again.”

Years ago, a friend told me that her parish was getting rid of a grand piano. The piano was in a church-owned villa that had once been the king’s hunting lodge. The friend told me about a secret underground passage, connecting this villa to the Villa Reale, the king’s summer residence. She winked. “The king used to meet his mistress here.”

The piano, referred to as the king’s piano, was a Viennese make, more than 100 years old. It was the smallest grand I’d ever seen, a 1/4 coda, no longer made. The parish priest warned me that the piano had slow, old fashioned action. I thought only an expert pianist playing repeated notes or trills would be bothered by slow action. I imagined the king playing love songs to his mistress. Or maybe the mistress would be playing. They didn’t need to play fast.

The real problem with the piano was that the pins holding the strings would slip, causing the piano to go out of tune.

My usual piano tuner examined the piano and pronounced it “da buttare.”

When I told the priest I wanted it for a small immigrant church whose organ had been destroyed by flooding, he referred me to an elderly tuner. This tuner had worked for me years ago and was well known in Milan and in Brianza. In his prime he’d cared for many of the area’s concert grands.

He said all the pins and strings needed to be replaced and hammers repaired. He offered to do it for free, as a fioretto, for God and the church.

Even after he had repaired the piano and had it moved to the immigrant church, it’s inner workings were so unusual and so fragile that other tuners refused to touch it. Thus, the old tuner, for a minimum fee, drove to Milan every six months and tuned it.

The first time he came, I asked if the king might have played the piano. He said Umberto was the king who’d spent time at the hunting lodge but he’d died in 1901, three years before this piano had been built. The mistress story was only a story. As he set out his tuning tools, he told me about a famous teacher’s Bosendorfer and a famous pianist’s Tallone. The pianist’s father, an artist, had worked for Queen Margherita. He said even the Queen had a Tallone, a fine Italian piano. He described these pianos in detail. He talked of an old rental piano of mine he’d tuned 20 years ago. He remembered the broken strings, the broken jack. For him, tuning is an act of love. Once he’s tuned a piano he knows it intimately. He doesn’t forget it.

I used to watch him, a small man bent over his work. He didn’t use a tuning machine, the way young tuners do. With a strip of red felt, he’d isolate the middle of three strings belonging to each note. He’d strike the key, turn the pin with his tuner’s crank and listen, listen, listen for the rhythmic pulsations caused by clashing sound frequencies. He’d lose himself in one tuned note, as though it were a whole melody — the sound rising to a peak, nearly disappearing and then swelling like a ringing bell. He’d say of the piano, “The lady still sings.”

He credited the piano’s beautiful sound to its hammers. In modern pianos, the hammers which strike the strings are covered in felt, which wears down, causing a tinny sound. This piano’s hammers are protected by leather. He says they’ll last another 100 years. Unfortunately, attached to the hammers are cumbersome little platforms and wires, which sometimes scrape against the strings. The tuner scorns the Viennese maker for using this clumsy mechanism, after better methods had been invented. He said, “Some people don’t want to change.”

A few days ago, I called him again, promising his sister I’d only say hello. His voice sounded jovial. He had a pacemaker now. He’d started tuning again because not working was traumatic. He could no longer drive to Milan, however, and gave me his student’s phone number. He asked about my father’s pacemaker. After an embarrassed silence, he said, “I use a tuning machine now. It’s the modern way. I can tune a piano in half the time.”