The Tsar of Love and Techno 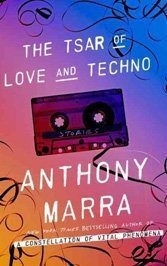 “Everyone needs an origin story,” muses a supporting character toward the end of American writer Anthony Marra’s moving collection of puzzle-piece stories that span a tormented century of Russia history. He opens in 1930s Leningrad with Stalin-era censor Roman — master of the airbrush, a “maker and eraser of human faces” — whose denouncement of his brother’s ideological infidelities is a prelude to his own swallowing up by the period’s knee-jerk purges.

Roman’s guilt-marred decision to airbrush the face of his doomed brother into a prized Chechen landscape and the vicissitudes of that haunting, vagabond painting gives Marra license to introduce characters from the arctic city of Kirovsk, a leaden and malignant anti-Las Vegas 1,000 miles north of Moscow. Once the prized seat of Soviet nickel mining, Kirovsk is now a detritus-filled Siberian wasteland. Its lovingly sculpted emissaries — a failed ballerina and starlet; a thug; his music-loving brother; mothers, aunts, and others — are the progeny of defeat and the substance of a Russian whole.

Galina, Miss Siberia and star of a 1990s spy movie, will leave Kirovsk, marry an oligarch, and purchase the Chechen pastoral. Her good-hearted ex-boyfriend Kolya will find himself on the Chechen front, first as a conscript, later as a mercenary, blown up in the meadow the landscape portrays. One of Galina’s friends, Lydia, is a 1990s a mail-order bride in California — but the marriage stalls and soon she’ll be back with her mother in the white forest of Kirovsk’s fake trees, her life meaningless to drug enforcers, including Kolya. Then there’s Kolya’s brother Alexei, or “Little Radish,” eager to make post-Communist inroads but foiled by the pollution of both city and country, a metaphor Kirovsk serves well. As Roman’s grandnephew, he is in possession of the painting.

Marra builds an ambitious (perhaps overly ambitious) Rubik’s Cube of family ties and genealogical spillage with characters that exist to serve memory lane. They turn them this way and that, sketching and stretching a 100-year-long fictional canvas rife with irony and black humor (“You prove loyalty through betrayal,” says a paraplegic beggar.) The painting link makes for half-mad fathers who curate self-styled outer space museums, Chechen bureaucrats who “manage” culture from Grozny’s rubble, and even apprentice cheater Alexei — who uses fans of Tom Hanks’ Facebook page to craft identity theft, a natural progression from airbrushing to hacking. These “parents and penitents” live in “an eternal present tense” within an ageless museum of Russian origins, a beautiful purgatory evoked with uncanny passion by an author who has the gift of entering into a culture that isn’t his, and working diligently to possess it.