The Truth About Celia 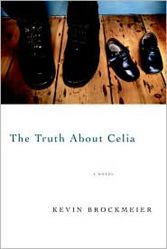 Brockmeier’s first novel is a sweet, sad bird that flits between Pied Piper and Twilight Zone. Seven-year-old Celia, the daughter of author Christopher Brooks, disappears from the garden of her historic house while playing. Psychologically dismembered by the disappearance, Brooks keeps her alive through voices and shifting perspectives, literal and ghostly. His wife Janet, a musician, copes with the loss by going to movies and having an affair with the town police chief.

As the years pass, Brooks imagines Celia cast back into the Middle Ages, then as a single mother of a boy who befriends a magician, finally as a phantom that communicates with him by calling him on her plastic Walt Disney Talk-to-Me Telephone. Each scenario grows closer to pure vapor as Janet leaves to live with her sister and Christopher descends into the gentlest kind of madness — self-absorbed resignation. “Our place in the world is the smallest possible perch,” Brockmeier writes on Brooks’ behalf, “and the smallest jostle can cause us to lose our footing.” Losing a daughter into thin air “like a spirit” is a big jostle, and Brockmeier handles the complex substance of the hurt the way a bird might build a nest, branch by branch.