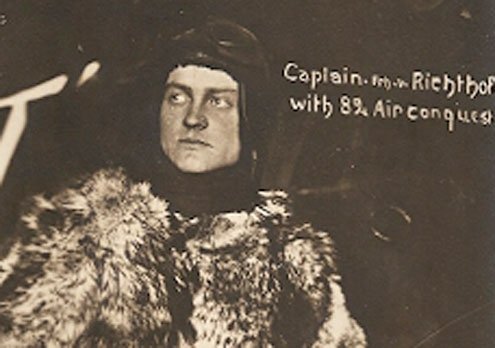 From a trunk, endless postcards, including images of the "Red Baron," Manfred von Richthofen, killed in 1918.
L

ike so many stories, this one begins with a trunk. For years the trunk sat with several others in a dark corner of the former billiard room over my family’s garage, where it had been shoved in 1965 after my grandfather’s death. Occasionally we children interrupted our ping-pong games and tried opening them. But the clouds of dust and locks that had foiled foreign thieves would frustrate our dreams of hidden treasure and send us back to our games.

One day my mother found a tangle of old keys, one of which worked. Inside one trunk was a built-in, fold-up ironing board and chest of drawers, plus a few treasures: a beaded Flapper dress and some stiff pieces of ermine fur someone hoped to re-use, tiny wedding slippers from the 1850s, a 1912 University of Chicago letter sweater and packets of letters. The old clothes thrilled me; the letters did not. After a quick look at what was inside and the sad words, “Uncle Lothar,” Mom stuffed the letters back in the drawer.

After closing my family home in 2007, I shipped the trunks to my home in New Hampshire, where they were shoved into another dark corner until my children’s hope of hidden treasure spurred me to re-open them. Nothing had changed, except the children loved the old clothes and now I preferred the letters.

These began in 1898, when Lothar R. Long (my great-uncle), was six, and ended when he died in 1920. He wrote home about canoeing in Wisconsin’s Flambeau Flowage and his around-the-world cruise in 1912. He wrote on old notebook paper while “hobo-ing” from Chicago to Seattle after college. He wrote home from Seattle on Y.M.C.A stationery. When Seattle and journalism didn’t pan out, he enlisted in the U.S. Marine Corps, using their stationery to write home about boot camp and serving as an American Legation guard in Peking.

A big chunk of letters — about 50 pages — were from World War I. After he finally found his calling as a Marine in Peking, he won a place in the officers’ training school at Quantico (only tents at the time). After January 1918, his letters came from France, typed between the battles of Belleau Wood, Sant-Mihiel, Blanc Mont and the Meuse-Argonne.

The trunk’s stories weren’t only Lothar’s. Also included were a wallet of letters to Lothar from three French women all in love with him — at the same time — and all complaining he never wrote (he was at the front, girls!). Pressed flowers almost a century old fell out of tiny envelopes, which Lothar was probably the last to open.

It didn’t end with letters. There were military intelligence reports, German battlefield maps and a German soldier’s torn-off epaulette. French certificates decorated with a lurid, flag-waving Marianne awarded Lothar several Croix de Guerre medals. Lothar himself appeared in photos, immaculate in uniform in a Paris studio or scruffy on horseback. His face was among the rows of young men in panoramic photographs snapped on the eve of departure for France or while occupying Germany in 1919.

Lothar’s enemies were there too. German picture postcards portrayed “Red Baron” Manfred von Richthofen — so-called because the ace’s Fokker tri-plane was painted red — and of young soldiers, gas masks at hand, readying for combat. Other cards featured images of the hometown, bawdy cartoons and sentimental scenes sent by the folks back home. Some had been written and addressed but never stamped or mailed.

Though the postcards made it out of the trenches, many of their senders did not.

Other stories crowded out of Lothar’s letters, begging to be heard. I followed these calls into the story of the 6th Machine Gun Battalion, innovative “shock troops” whose artillery supported the legendary 4th Marine Brigade, the “Devil Dogs,” famous for telling the weary French: “Retreat? Hell, we just got here.” Lothar’s story illuminated America’s role in World War I, soon to be overshadowed by its deeper presence in World War II. The letters showed me the cost the fighters paid for being involved in a war America hastened to forget; Vietnam was nothing new. My great uncle gave life and shape to Marine ideals of service, grit and intellect.

Lothar’s story connected me to the descendants of his beloved commander, Capt. Edward Ball Cole, Harvard graduate and, said Lothar, “the best machine gunner I ever saw.” Cole’s grandchildren didn’t know that their grandfather died while standing next to Lothar: he got his wounds when a grenade he threw back at some Germans blew up in his hand.

My own memories acquired meaning. I suddenly understood why my mother insisted on taking a houseboat trip to France in 1967 on the Marne, of all French rivers. As a seven-year old I’d felt cheated when we made a rainy visit to a castle at Chateau Thierry where we found a ruined wall and some grassy mounds, no romantic drawbridge or moat in sight. Uncle Lothar was why she insisted on visiting that battle site (the wet weather, disappointment and my childish spelling convinced me it was called “Chateau Teary.”)

Each time I re-read these letters, and I’ve been doing it a lot these days, I find new threads to follow, perhaps to the families of the boys who never made it home Germany or the girls whose beloved died without ever writing back.

The trunk is open, but I’m far from knowing all that it contains.