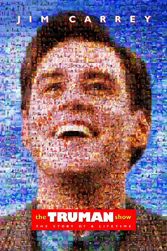 Jim Carrey’s earnest Truman Burbank lives in a 1950s-style sitcom — until he discovers his whole life is staged and on stage to amuse the world (Burbank Studios, anyone?) This is “Network” meets “The Wizard of Oz” with incipient reality TV tossed in for good measure. Director Peter Weir, working from a shrewd script by Andrew Niccol (“Gattica,” “Lord of War”), spends the early going chipping away at Truman’s happy-camper armour.

Carrey’s strength is his fine transformation from Dick Van Dyke to basket case. Weir then turns to Svengali-like Truman Show producer Christof (Ed Harris), who combines father figure and Prague Spring artiste under a dark-halo beret. “It isn’t always Shakespeare, but it’s genuine,” Christof says of Truman’s engineered existence. “It’s a life.” Not for Truman. And he’s the one who has to decide whether to walk away from the production around him, essentially killing off his life’s cast (TV as artificial insemination of character).

Though the Weir-Niccol duo are on to something exceedingly good and smart, the emphasis on Truman’s increasingly desperate deliberations combined with Christof’s public service disclaimers give parody too large a berth, taking some bite out of a tart package. Still, a sincere and hypnotic meditation on Big Brother’s little brother, entertainment. See it in tandem with “Pleasantville.”