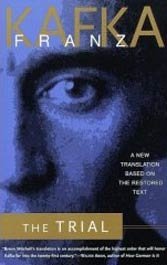 By Franz Kafka, translated from the German by Breon Mitchell

“Kafkaesque” persists as a popular critical modifier for all that’s labyrinthine, tortuous, and potentially knowable but entirely out of reach. Clues about the Kafka labyrinth begin here, in “The Trial,” his most enduringly relevant novel, and in the character of his alternately self-righteous and forlorn protagonist, Joseph K., the 30-year-old equivalent of an aspiring Wall Street banker who is brusquely and cryptically informed that he’s been charged with an unnamed crime and must prepare for his trial. The realization, and the preparation, plunge him into a parallel realm in which court offices are located in attics, maids are the seducers of gullible men, and painters, priests, and lawyers in possession of the ambiguously fickle keys to the meaning of justice, which like man’s firm sense of his place in the world, is also on trial.

The story’s narrative prism depends wholly on K.’s deepening fears, and of his maturing sense of inevitable guilt. Once “charged,” he’s on the defensive in an epic struggle of his own making, one that whose juices flow from paranoia and intimations of sexual indiscretion. Kafka’s screw-turning introduction of twists and turns make it clear that while K. may not have actually committed a crime, he’s unconvinced of his own innocence. His actual trial, which never actually comes to be, is summed up instead by a year of enchantment and mutilation that reflect the realities of life in a bureaucratic world composed of absolute but arbitrary rules. In that sense, K. is a timeless metaphor for man’s seismic shifts in conscience and self-esteem, an emissary of bewilderment and, finally, resignation. His interim task is reckoning with life’s constantly unforgiving theater, at once comic, cruel and circular (“Shall they say that at the beginning of my trial I wanted it to end, and now, at its end, I want it to begin again?”)

Kafka’s ability to cover so much civil and symbolic ground in so little space retains its majesty, just as K. still stands as reflection of the guilt that objective existence has in its genes. Man is the trial he makes for himself. He can’t escape the maddening spectacle of self-assessment. And self-assessment, with real or imagined legal constructs, is most often a partner to perdition.

Anyone who lives in the world also lives on the fringes of the one K. inhabits, or believes he does, and that universalizing of personal alarm, the perfection of futility and victimization, is the gift Kafka gave to modern society.

Schoken’s 1998 edition, translated by Breon Mitchell, stands out for its extreme attention to Kafka’s original, and unfinished, manuscript.