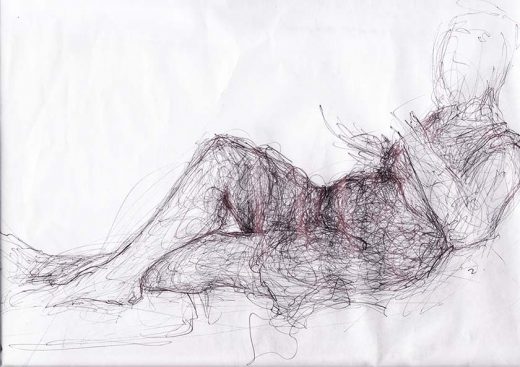 American artist and teacher Kimon Nicolaides wrote the pioneering "The Natural Way to Draw" in 1944, shaping the approach to basic drawing for decades.
M

uch “scientific” psychology is reductive and analytical. It takes separate aspects of our being out of context, dividing us into parts or functions: behavior, cognition, language, sensation, relationships, and periods of development. It’s as if these factors had no continuity of their own, let alone an interrelationship with each other. Such a view of human beings seems destined to produce detached, if not deadening, facts. A slew of data without meaning or context.

From this vantage point, adults are framed as entities born yesterday, lacking a past, a childhood, or the early relationships that over time made them who they are. Their experiences are broken up into categories. I object to this approach, and I often think one of the reasons I do is that I learned to draw.

These authors demonstrate that humans generally don’t draw what they see, but what they think they see.

I drew a lot as a child but was taught to do so seriously in the late 1960s by my high school art teacher Phyllis Lord Kilgore. She used techniques developed by American Kimon Nicolaides from his 1944 book “The Natural Way to Draw.” Artist Kilgore was a great teacher who created a safe haven for us nerdy kids. We were the ones who were never much interested in the football team and the prom-dance crowd. After school, we’d meet in the “Art Studio” club and often stay an hour or more after classes ended every day.

Kilgore used Nicolaides’ very effective exercises and techniques, many of which were rooted in an understanding of shapes and contours. Decades later, Betty Edwards’ book “Drawing with the Right Side of the Brain” applied early research into cerebral hemispheres to help explain the act of drawing.

These authors demonstrate that humans generally don’t draw what they see, but what they think they see. Edwards’ explanation is that we use the left, “linguistic” hemisphere of our brains, when we should be drawing with the region that governs visual-spatial relations, among other things. If the language side interferes, what we draw are symbols rather than the shapes of things themselves.

So, typically, we know that eyeglasses sit in front of the eyes, and so we draw them there, centered perfectly over the pupil. But if we actually look at a person wearing glasses, the frames may appear to cut the eye in half, particularly if they’re looking down. As teenagers, Nicolaides’ techniques helped us to look at the shapes themselves, without being distracted by what they might “mean.” It’s the shapes in context — with background and foreground given equal value within the whole — that allows us to draw.

My husband, who practices Tai Chi, said he once explained a movement to a student, showing her how it was derived from martial arts and telling her that understanding its original purpose would also help to do them. Thus, a “pushing” movement requires the force of the entire body to give it strength. The student was surprised how powerful the action was when it started from the foot, leg, and torso and not merely as a “push.” As with drawing, we’re captivated by words and the symbols they carry, and we think of “pushing” as something done with a hand. But the whole is stronger than any one part.

Language allows us to share experiences, even ones that others don’t have, but only a part of them.

I remember how my musician friend Mary Tzambiras, who taught me to sing, explained the difference between music and the notes. Musical phrases have their own vitality, direction, and force, all of which sweep them along. Music played too literally would be like robotic speech. A note exists in the context of a phrase, which in turn exists in the context of the whole of the piece.

In the 1980s, Daniel Stern, a pioneer in infant research, described the entry of language into our lives as both a boon and a curse, “a double-edged sword,” he called it. It extracts and captures some aspects of our global experience while at the same time ignoring others.

For example, a baby might notice the sharp or glowing contours and colored fluctuations of a spot of sunlight beaming through a crack in a shutter — along with the emotional and physical experience the visual image evokes. The mother might enter and say, “Oh, look at the spot of yellow sunlight on the wall.” Though the experience was global, words are limiting. They confine the experience primarily to the visual. Language allows us to share experiences, even ones that others don’t have, but only a part of them. Their wholeness is cut away.

The problem grows worse when we give ambiguous messages, with tone of voice contradicting the content of the words: “Oh, that was really smart!” The message is pure sarcasm, but the speaker can easily deny that — “What do you mean, my tone of voice? I only said you were really smart.”

If we cut experience into small bits without allowing for their full context, we’re left with words bereft of tone, music played mechanically and without emotion, and drawing that is simply stereotypical, without character.

Likewise, a human science should see not parts and pieces of the person but the person in their entirety, whole and in context, because the pieces are not enough.