The Translator: A Tribesman’s Memoir of Darfur 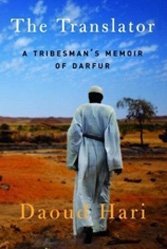 Pull up a seat. Daoud Hari is going to tell you his story, and it’s unlike any you’ve heard before. You’ll hear about how he escaped the genocide in Darfur, and how his brother did not. He’ll describe the rifle that was pointed at his head by a rebel soldier who accused him of spying, instead of translating for foreign journalists. He’ll tell you about bearing witness to countless atrocities, and why he risked returning to his homeland again and again to do so. It is always intimate, sometimes tender, often horrifying. It is a story we are both privileged and obliged to hear.