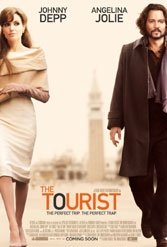 Under the HD eyes of Paris police and Scotland Yard, a beautiful British woman gets a handwritten note from her on-the-lam paramour instructing her to hop on a Venice-bound Eurostar and find a companion who resembles his physical type. So it is that mystery women Elise (Angelina Jolie) meets accidental tourist Frank (Johnny Depp), a pretty if improbable turn of events that suits German director Florian Henckel von Donnersmarck just fine, since this is his Hollywood coming out and he’s taking no chances.

What follows is an inferior riff on “Charade,” the kind of Euro-thrillers that once pinned amnesia or mistaken identity on the likes of Cary Grant and Audrey Hepburn mistaken and let exotic surroundings do the rest (Brian De Palma’s wonderful 2002 “Femme Fatale” revived the genre). Von Donnersmarck certainly doesn’t stint on the lush and the lavish: Venice is Jolie’s Red Sea, and she parts it and all else around her, Depp included.

The downside of the weave is fierce shallowness of plot (basically tax cops tracking down an embezzler), tedious Italian stereotypes, and farcical clichés. A villain strangles a bungling henchman while being fitted for a suit; Venetian police and concierge excuse absurd behavior to “Americans”; James Newton Howard’s ebb-and-flow score follows the action like a not-housetrained puppy.

Beneath the thriller pretense is a mediocre, Venetian-spiked travelogue featuring Jolie, arguably the most beautiful woman in the world, fitted to look mostly like Jacqueline Bisset; and Depp, one of its most engagingly nonchalant good guys, in a portrayal he literally shrugs off.

Eyes wide open, von Donnersmarck worships tackiness. When Frank tells gown-draped Elise that she’s “ravenous,” she suggests she’s nothing of the sort. Then again, he might be hungry. Cut to restaurant. No harm, no foul.

Put aside all thoughts of von Donnersmarck’s debut film, the acclaimed “The Lives of Others,” a sober and acclaimed look at spying in East Germany’s STASI era. This is a throw-away.