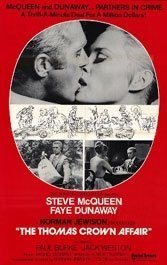 It’s hard to imagine a cooler male lead than blue-eyed Steve McQueen during this blessed thirty-something stretch of his sexy but often tormented career. Here he’s Thomas Crown, a bored, suave, polo-playing Boston millionaire who plays puppet master for a perfect-crime bank heist to keep himself amused. Enter insurance investigator Vicki Anderson (Faye Dunaway), who both does and doesn’t fall for Crown’s handsome aloofness. Intrigued by his laissez faire attitude, she multitasks: investigating and flirting to try to unravel and expose Crown’s babushka doll world. Crown knows she’s circling around and pulls a double-dare: He organizes another heist. If she really cares, she’ll let it slide; if she doesn’t, she’ll tip her hand.

McQueen was preternatural charmer with a live-dangerously edge. He skates and slides, opening trap doors every time anyone seems to have him dead to rights. Director Norman Jewison milks the Crown-Anderson cat-and-mouse game for all it’s worth, tossing in chess match to ramp up the foreplay and tease the camera closer. In fact, the movie is much about camerawork, including early split-screen, then an amazing gimmick. Crime and investigation matter less than the charm of the two Hollywood slow-dancers. There’s probably no more irresistible image of Indiana-born Terrence Steven “Steve” McQueen than the one that smiles out of the film’s final scene.

Sean Connery, at the time trying to make a clean break from James Bond 007, was offered the Crown role but declined (he later expressed regret). Remade in 1999 with Pierce Brosnan and Rene Russo.