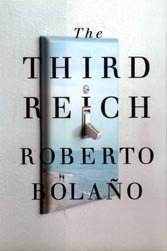 Udo Berger, a 25-year-old World War II war-games devotee, is on a Costa Brava vacation with his girlfriend Ingeborg. It’s a late August in the mid-1980s. He fondly recalls the Spanish resort from the days when he and his Stuttgart family visited in his teens. But remembrance and the present are antagonists.

Udo’s world is now his board games, in particular the “Third Reich,” which recreates the war’s seminal battles. He’s the reigning German champion, a “lord of the night,” a boy-man whose waking hours are spent contemplating his next move. He soon alienates his lover and her vacation friends. But Bolaño sets a trap for Udo, gradually pushing the upright but impressionable narrator toward a troupe of unkempt locals — including a beach bum and mysterious burn victim known only as El Quemado (“A face floured lunar white…”), whom Udo teaches to play. “On the inside he must be a lot like you,” the hotel owner tells Udo. Haunting words.

These disordered, indolent locals, their existence engineered to menace the controlled Udo, nourish an undercurrent of German vulnerability and self-loathing. When a fellow German tourist Charly drowns suspiciously (a murder?) and Ingeborg returns to Stuttgart, Udo is left to satanic dreams and delusions of his own undoing. He ignores work commitments to linger on the accursed Spanish coast and finish his doomed “Reich” match with the disfigured but emboldened El Quemado.

This riff on “Sorrows of Young Werther” (laced with wartime admonishments) was discovered among the Chilean author’s papers and quickly published by a Bolaño estate eager to capitalize on this posthumous fame. Though it’s true Bolaño lived for years in campgrounds near where the novel is set, it’s hard to imagine him swearing by so erratic a work. Blatant and inconclusive, it lacks the wryness and bitter sarcasm of most of his leaner anti-authoritarian fiction (see “Nazi Literature in the Americas”). Nastasha Wimmer translates capably, though it’s hard to imagine Bolaño’s 1980s Spanish making reference to “hot” women and “hookups.”