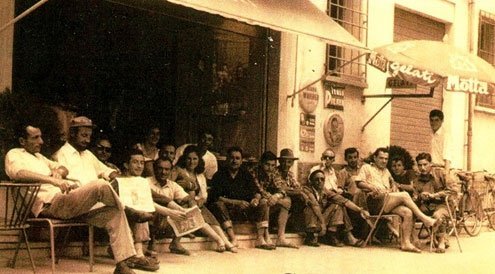 Bar culture has been central to Italy for a century.
W

hen I first moved to Rome, I lived in Trigoria. You’d go past the Grande Raccordo Anulare, down Via Laurentina to Via Trigoria, then beyond the tiny town center finally reaching the far corner of a vast neighborhood that resembled an American suburban subdivision. There was a tract of dirt road between me and my bus stop, and rolling hills over which I could watch the sunset.

But something in the neighborhood struck me as odd. Biking and walking helped me figure it out. Right in the middle of the winding subdivision was a driving school. Along with a pizzeria and a thrift shop.

In America this could never be. I’d grown up in the American suburbia, where businesses and residential homes didn’t mix. American zoning laws are based largely on cars. People are prodded to drive to their places of commerce. Otherwise they stay home.

The Rome inconsistency seemed ugly at first. Who wants a driving school as a neighbor? But that was before I discovered the corner bar and the local market. I found the same pattern in Germany and France. All these neutral meeting places fostered a tradition of fraternity, where people could meet for a coffee or an aperitif.

America doesn’t have an equivalent. There’s no place where neighbors can meet after dinner or share a relaxing afternoon. The places we do have lack names. Joints, dives, and hangouts all come with bad connotations. Ray Oldenburg wrote a book called “The Great Good Place,” which discusses the paradoxical lack of neighborhood in American neighborhoods, calling the missing ingredient a Third Place.

Our First Place is our home, our Second Place work, and our Third Place should be the neighborhood place where we can go to simply be human, with humans, and socialize.

Most of my American friends commute to work. Runners in the rat race, they then rush home to their womb. Their homes remedy the stress of the outside world. But the pattern may place too much pressure on house and family as cure-alls.

My dad can’t pop over to the local pub after work because there isn’t one in walking distance, and he’s far too responsible to drink and drive. My mom seeks relaxation in meditation and spas. Many of her generation can only find peace at the bottom of a pill bottle.

But the lack of place may not be the fundamental problem. Even if there were a pub, my parents wouldn’t go.

The idea of added (and unfamiliar) company sounds to our ears like an additional stress. Instead of a communal focus, ours seems more shortsighted. We’re not inclined to see much beyond the picket fence of our own yards.

The repercussions of the focus are evident in the daily life of Americans. All they do must have a purpose. Getting fresh air, meeting to say hello – they must have purpose. We have sporting events, political meetings, committees, charities, and formal celebrations, even daily workouts in a gym. Meaningful pastimes all, but each require a role. We’re part of a team; we have responsibilities; we are host or guest; the people we share with are members, part of “our team,” “our group,” they’re “on our side.”

Going to the local coffee bar or pub is a more informal act. You go on a whim, for an hour, to catch up on local news, on gossip. You hear voices you might not necessarily recognize as your own. They are old and young, rich and poorer, conservative and liberal.

Going out to socialize in the U.S. is almost unthinkable. For one, it’s too expensive. Moreover, we’re taught not to stay too long. There’s even a word: loitering. We pause to consume, then leave.

The question, “Do you want to go out?” is often rejoined with a “With whom?” or “What for?” If you’re not shopping or going to a movie, why induce the hassle and stress of leaving the house?

In Italy, youths gather at cafes. They spend 70 cents on an espresso and chat for hours. There’s no social stigma associated with lingering.

The American paradox has an unsettling side. Though we seem to find comfort at home, stress is high, so are divorce rates. The alienation of the elderly is rampant.

Compare that to Italy. In cities where the local market and cafe are within walking distance, the elderly can avoid the nursing home fate. Their family members often visit. Nearby, they have something to look forward to daily, namely friendship and interaction.

“If we valued fraternity as much as independence, and democracy as much as free enterprise, our zoning codes would not enforce the social isolation that plagues our modern neighborhoods,” writes Oldenburg.

At all ages, we need places where we can go to be ourselves, to forget our troubles, to pick up new ideas and develop friendships with people who should be part of something precious — the community.