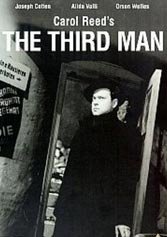 Sir Carol Reed’s stylish noir is like vintage red wine, and as good as they come. Wide-eyed American Holly Martins (Joseph Cotten), “a hack writer who drinks too much,” stumbles into divided, postwar Vienna at the invitation of prewar friend Harry Lime (Orson Welles) only to learn Lime has been killed in a mysterious traffic accident. Fair enough. But if Lime’s death was an accident, why is a fastidious British military police major (Trevor Howard) poking around for details? And why are accounts of the accident inconsistent? A punchy Graham Greene script sees Reed transform dime-store Western author Holly into a dogged sleuth who gradually unravels a Gothic story whose constituent parts include the Viennese black market, the girl Harry loved (Italian Alida Valli as Anna), Harry’s dubious friends, tainted penicillin, with each new puzzle piece darker than the one that preceded it.

The more the earnest, wisecracking Holly digs, the more he wonders if Harry is really dead. Soon, he’s left Westerns behind and become a character in a different kind of fiction, this one a pre-Cold War murder mystery. Reed does so much right it’s hard to keep track. Vienna is less a city than an alleyway of menacing faces. Spoken German is never subtitled, putting less sophisticated audiences in baffled Holly’s shoes. Holly’s writing “vocation” — he’s the author of “The Oklahoma Kid” — gets a number of light pokes.

Throughout, good guy Cotten strikes all the right notes — both bewildered and wise —while the ever-sturdy Howard is perfectly and uprightly British. The villainous Welles — “The dead are happiest dead…” — is in crystalline form. Reed and Greene introduce but reject a romantic subplot, leading to a memorable, five-minute fadeout.