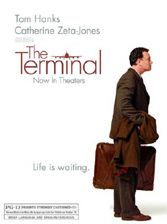 Steven Spielberg at his most playful. Viktor Navorski (Tom Hanks) arrives at JFK from an Eastern European nation that’s fallen into turmoil. America the Beautiful won’t let him in, or out. He camps out in the terminal. Silly stuff, admittedly, but Hanks pulls a Meryl Streep and lets his accent and “lost-ness” navigate toward the small but earnest industry of comedy. Hanks’s instincts are true. Stanley Tucci is fun as the head of airport security. The result is a charming little movie about belonging, or wanting to.