The Tenth of December: Stories 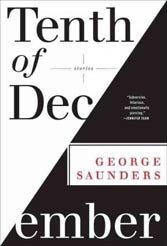 The best satire is black art. It is sorcery and subversion. It climbs into a known world and eviscerates it using its own tools, in much the way the 9/11 hijackers transformed commercial jets and skyscrapers into the underbelly of what they would normally seem. This is what the best George Saunders stories do. They subvert the known realm by hijacking its language and purpose to fit sinister synapses. Saunders’ gifts are sporadic in this uneven 10-piece collection. But when the he’s on there’s no denying him.

Take “Victory Lap,” the opener, on the face of it an attempted rape told through the eyes of girl, boy, and assailant. But the telling comes in bytes, in slivers of text-message language, of Facebook-style gossip, putting distraction ahead of horror until the mock casualness explodes. Or “Puppy,” where one family’s hunt for one leads to the discovery of a boy chained to a tree. Or “Escape from Spiderhead,” in which naive test subjects in a strange complex depend on drug cocktails — including “Verbaluce™” — for their sexual and emotional responses, for their range of language, insight, intelligence, until the construct turns mean. Or “The Semplica Girl Diaries,” where “engineered” immigrants chained to a “microline” are a cross between pets and lawn ornaments in a set up that is less science fiction than skewed send-up of the warped possible, like a liberal’s nightmare of consumer-culture cancer.

An engineer by training, Saunders is a corrupter of common sense whose writing mind puts modern dysfunction into a personal supercollider and emerges with adults who speak like children in trouble. Their “cool” patois is unnatural, sinister, ghastly, engrossing, the language of personality disorder, of decent blue-collar people lost in space.

The title story is perhaps the most astounding, taking a fat boy’s imagining of a ghoul-realm and slamming it up against the poignant ravings of a dying, demented man, each one deposited a snowy landscape, with Saunders charging up each strange body electric so that even puns — “What a victory he was wresting. From the jaws of the feet” — are equal parts compassion and disease. His skills are that of a cackling Merlin determined to see the world as a theme park gone mad, a dimwitted landscape where medications and programming lord over people who delude themselves into thinking they still have any choice, part of a basic human goodness Saunders refuses to abandon. A word-merchant attentive to social warts and blemishes, but also leaking “drops of fellowship,” he is America’s Hogarth, often unbearable and entirely essential.