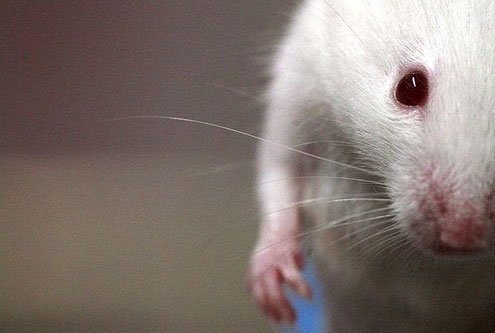 s the freezer door swung shut, the gravity of what I had just done sunk in. Just 15 minutes ago, the body now stiffening inside had been running, climbing, eating, drinking. I injected it with ketamine/xylazine to anesthetize it. I cut its chest open. I put it on a ventilator. I snipped out its heart and lungs with tiny scissors.

When it was all over, I wrapped it in scratchy, brown paper towels, sealed it in a gallon plastic bag, and tossed it in the freezer. Crush a cricket and I cringe; bleed out a mouse and I didn’t blink. What did this say about me? I left the research lab that day with a furrowed brow, but without an answer.

As if I weren’t troubled enough, I realized that in medical school, which I start this fall, some professor will no doubt utter the phrase “life is sacred.” I agree. How, though, to reconcile that idea with the fact that to save human lives, to improve them, we kill other animals?

These questions have nagged me since that first mouse almost two years ago. They haven’t prevented me from working in biomedical research. But asking them forced me to probe what I am doing and why. Along the way, I have asked other questions and made other observations, which I will explore in this column. As a former reporter and editor, I come by such questions and observations naturally. For years, publishers paid me to query and conclude on matters of public interest, such as zoning laws or school board elections. I stick to science and medicine these days, since “physician-scientist” is what I want to be when I grow up (or finish medical school, at least).

That career path means working with animals — probably mice, and probably killing them in the end. Some people might say, “Oh, it’s just a mouse.” When I stare down into a yawning chest cavity, though, at a pulsing heart, that gap between man and mouse narrows for me. Life is life. Death is death. I dole out the latter. (Count for last week: 22 rats, 18 mice.)

Watching a life come and go, instigating that coming and going, unsettles me all the more because its inception is such a miracle. Even now, every time I find a new litter of pups, called “pinkies” on the first day of life for their rosy skin color, I am awed. That first day, we don’t disturb the mother or the pups. To make sure they are alive and wriggling, we peek underneath the clear, plastic cage. From that vantage point, I can still often make out the little white “milk spot” on a translucent abdomen or two. “Good, they’re nursing,” I tell myself. The pups, born naked, blind, and deaf, grow and change daily. Within one week, their ears are fully developed and fur starts to appear. By 14 days, their eyes open. That’s when we kill them.

“Kill,” though, is weighty word, rife with connotation. Instead, we usually say, “sac,” short for “sacrifice.” Though using another word changes nothing, it can allow for a change in attitude – if you let it.

It can lend some respect and dignity to the animals’ lives, some purpose in ending them, and remind us to use only as many as are necessary.

As the word “sacrifice” suggests, there are elements of ritual in what we do, at least unconsciously. The animals are housed in a separate facility; we “sac” them in our lab. After we bring the plastic cage in, one of us drops a few Cheerios — a rare, exciting treat — onto the shredded, woody bedding. I work in a neonatology lab where we study (and hope to one day prevent and treat) a chronic and sometimes fatal lung disease. This disease affects premature babies exposed to high oxygen, so the mice we sac are juveniles, usually 14 days old. The way we induce this disease in the pups is to put them into an oxygen chamber, along with their mothers. So we have to sac the moms as well. This is the hardest part for me.

“I’m sorry we have to do this, mom,” my lab manager often says as she grasps the female mouse by her tail. “Thank you for taking such good care of your babies.”

Then she gently lays the mouse, its nipples still swollen from suckling, into an anesthetic-filled glass jar. The mouse quickly asphyxiates.

Watching this for the first time shook me inside. It still does, a little bit. There is a tension there, a taut line between compassion, curiosity, concern, and conscience. Through it all, I believe in an honest search for personal reconciliation. That makes us different from mice. That makes us human.