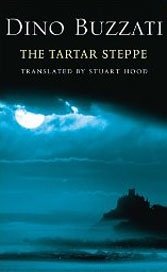 By Dino Buzzati, translated from the Italian by Stuart C. Hood

ort Bastiani was the Hotel California of another time: Checking in meant never leaving. The mythic fort lulls occupants into awaiting an enemy that eludes shape and size but over decades intensifies its mythic grip on the collective psyche. Dreams of glory fade, aspiration mocked into submission, while the horizon yields only teasing specks.

Though Buzzati’s remarkable 1945 novel lobbed a cannonball at Fascist indolence and delusions of grandeur, the parable is really about the cruel tricks of time. Lieutenant Giovanni Drogo bids farewell to his mother and cozy home city to make a man of himself in a “famed” desert fort, his presence there a “harbinger of wonders to come,” or so he believes. Yet the fort-amid-the-dunes is obscure. When Drago finally reaches Bastiani he find a decaying Xanadu whose narcotic gravity affects all inside it.

Chivalrous and impressionable men stand ready to repulse a Tartar attack from across desolate steppes. But such attacks are legendary at best, and the behavior of the real enemy benignly ambiguous. Waiting turns into pastime (“… a pretext to give life some significance…”). “Don’t catch the madness,” the fort’s tailor warns Drogo. But he does. And the years pass. All is lost, he realizes, “for a bet made in a moment of pride.” As true for Drogo as fascism.

Buzzati, an illustrator and correspondent for the Milan daily, Corriere della Sera, published the “Il deserto dei tartari” in 1945. It was first translated into English in 1952 and later acclaimed as among the finest Italian novels of the 20th century. He died in 1972.