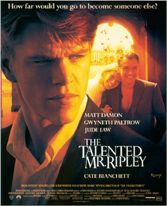 So what’s the problem? In a word, Italy.

Midtown bathroom attendant Tom Ripley (Damon) borrows a Princeton jacket to play piano at a New York garden party. A chameleon who needs cash, Ripley waffles through the afternoon by passing himself off as an alumnus (Damon handles this with nervous verve). When the chummy father of recent graduate Dickie Greenleaf offers him a grand and a free trip to Europe to woo his self-indulgent son back from an extended holiday in il bel paese, Tom agrees.

Which leads us — glossy sedans and a honking liner later — to Minghella’s pulpy version of the Old Country. Watching Elizabethan period pieces gives you no choice but to suspend disbelief. Seeing a make-believe version of 1950s Italy poses different challenges. I’ll get to that.

First, the story: Ripley, down Amalfi way, meets up with the languid Dickie (Law) and girlfriend Marge (Paltrow). Dickie can’t remember Ripley from Princeton, but Ivy League ennui gets the better of suspicion. The movie takes a noir turn when Dickie tires of awkward Tom and ostracizes him from his venal inner circle — including Freddie Miles (Philip Seymour Hoffman), a cad who lives a debauched life in Rome.

The movie depends on the rich man-poor man alchemy that put bored pretty boys and down-on-their luck wannabes in postwar proximity. You have to go along with Tom’s evolution from wastrel to the man who murders Dickie and steals his identity. Regrettably, Minghella props up the action with a slew of Neapolitan caricatures that kowtow to Dickie’s whims: girls who slur their Italo-English for cinematic effect and boatmen who gargle the word signore. The meal is served without believable contorno, unless you count Tom’s sexual confusion (which even Damon seems unconvinced of). Rome and Positano are brittle sets that make foreignness into camp and drain the movie of charm.

Hoffman, who dabbles in Rome’s dollar-powered extravagances, toils honorably to save the plot. So does Cate Blanchett as a textile heiress named Meredith Logue who pursues Tom-turned-Dickie. But the film’s Venice climax borrows limply from Fellini via Hannibal Lecter and ends with a whimper.

Interestingly, Italian director Liliana Cavani made her own Ripley movie, “Ripley’s Game,” a few years later. She cast John Malkovich as an older Ripley, set the action in the austere Veneto, and chose narrative over travelogue trimmings. Smart.