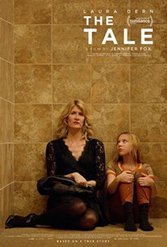 Child sexual abuse is a deeply unsettling subject. It’s difficult to write about and a nearly impossible tightrope to walk in filmmaking. Yet a number of films exploring the lasting effects of this kind of childhood trauma have cropped up in recent years, including Destin Cretton’s sensitive “Short Term 12” (2013) and 2017’s beguiling “Una,” with Rooney Mara. None of these, however, have been as true to life, literally, as Jennifer Fox’s “The Tale.”

Based closely on Fox’s own experiences, Laura Dern gives among her most layered performances as the adult Jennifer, who — in flashbacks — begins to place a summertime romantic relationship she shared at age 13 with an older couple (Elizabeth Debicki and Jason Ritter, both excellent) in a very different context. Now, as an adult, she must confront the fact that sexual experiences she always thought of as a natural part of her carnal awakening — in which she saw herself as an equal partner — may actually have been abuse on the part of the couple.

Fox’s forensic investigation into her own life is astounding. Her background as a maker of documentaries is evident and at times the brutal honesty makes the whole feel like an unfettered podcast. Yet it is just that brutal, intimate narration — how else to tell such a personal story? — which makes the film a compelling narrative

One particularly transcendent narrative moment comes when Jennifer discovers a photograph taken of her that summer and realizes she was significantly younger in appearance than she had imagined herself. We then cut to a flashback in which the actress who plays young Jennifer is seemingly younger than the one who has portrayed her in previous flashback scenes. It’s a redefinition of the “unreliable narrator” trope, one in which we trust the protagonist yet are forced to recognize that — to quote a line from “Her” — “the past is just a story we tell ourselves”; memory is constantly shifting and we have no choice but to be open to reinterpreting our own previous lives because we don’t always hold our own objective truth. It’s a challenging idea to grapple with and Fox does a superb job at guiding us through her thought process.

Usually the “based on a true story” banner is associated with cheap emotional manipulation. Here it adds an entirely new dimension. This is arguably one of the best films of the year. It is undeniably the most personal.