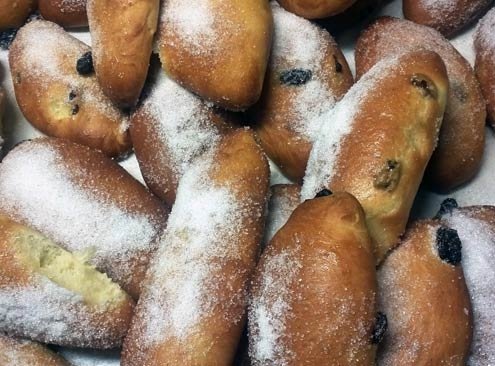 Maritozzi are Rome sugar buns. Photos by Germano Zaini.
I

t all started when I found myself at a mental health center on the outskirts of Rome. While pondering my pitch — I’m a drug rep — I smelled the strong aroma of food. I soon found out that the city’s famous Tu Chef cooking school was located just below the psychiatric facility.

I put my work aside and meandered down to the school, where I was suddenly face-to-face with a group of students dressed in chefs’ uniforms, all of feverishly at work over burners. I had inadvertently stumbled into a cooking exam. Three men in chefs’ hats lorded over a large kitchen, apparently monitoring the progress of each dish.

Impressed, I scurried back to the front desk and asked for a brochure. A skinny kid in the reception area strongly recommended one of the 10 cooking classes held for three hours on Sunday. Call before signing up, he warned me, since they wouldn’t hold the course unless six students enrolled, which was never a sure thing.

Driving home, I mentioned my wanderings to my wife, who encouraged me to sign up for a class. When the time came, I called them up asking about cooking course. No luck. They hadn’t reached the minimum.

But the receptionist had another idea. “I know it’s not what you wanted,” she told me, “but you could enroll in an advanced pastry class.” I perked up. The idea of learning something new won out over subject matter. I didn’t know much about pastry. I was about to learn.

The classes were held once a week for three hours and lasted 10 weeks. There were six of us, taught by a pastry chef named Andrea Fiori. On the first day of class, pastry guru Davide Malizia showed up to give us general tips. “Always remember baking is chemistry,” he said. “It’s an exact science. Two grams too many can change the outcome of whatever pastry you’re making. In cooking, you can improvise. Not in pastry. A great pastry chef can also be a great cook, but not vice versa.”

What I didn’t fully understand early on soon became clear.

The first lesson was in making cream, preferably light and fragrant. As soon as I’d finished, I poked a finger in, kid-like, to taste it. Big mistake. Fiori shot me a fierce look. He then turned to the class. “Never, ever put your fingers in the pastry. Fingers and hands can carry germs and infection. If you feel compelled to taste what you’ve made, please use a spoon.”

Sweets can make you forget you’re an adult.

During another session, one of the students insisted aloud that American sweets were too sugary and fatty.

So it begins, I thought to myself. Give Italians a chance to criticize American food and they’re all in. But Fiori was having none of it. How, he wanted to know, had she come to that conclusion. It turns out she’d been in New York City and tasted some cake.

Fiori patiently replied that while most Italians believe they make the world’s best pastry, it’s a myth. American baking has made amazing progress in the past two decades, he said. “In terms of cake design, artistic sugar, the use of yeast, and so on, American techniques are now among the most famous in the world. We Italians, always convinced we’re the best at everything, are taking hits across the board, even in food.”

Japan, he noted, won the annual World Pastry Championship in 2011. “They won a load of points not so much because of taste, which was more or less on par with the other entrants, but because of their design, which was clean and precise. Rome pastry has deteriorated. The city’s pastry chefs try to be too sophisticated. They load up on sugar and that blots out flavor.

Italian tastes have also changed, he added, “in part as a result of the proliferation of mass-produced desserts and the marketing behind them. We’ve also lost critical detachment from what we eat. When we come across a classic sweet, we’re wired to expect sugar, rather

than taste the butter and eggs. So much so that some pastry chefs don’t even use egg yolks in making cream, and inject dyes to make the result look real.”

The course was an eye-opener. Over the weeks, we made traditional recipes such as cream puffs and croissants, and international ones, including cheesecake, Sacher torts, and plum cake. We also made tea biscuits, apple pie, and torta della nonna (a Tuscan cheesecake), not to mention parfaits and custards.

How better to end a story about pastry than with a recipe for… a bundt cake.

— Using a whisk, slowly beat the oil and sugar so that they melt together. First, add the eggs and the milk, and then the sifted flour and spices. Pour into a bundt cake mold and bake for 40 to 60 minutes at 170C.

— Consider serving the cake with a passito (raisin wine) or a sweet sparkling wine such as Asti. Another option is an old-fashioned glass of milk.