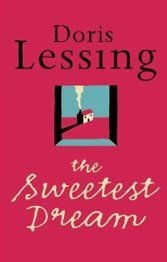 In 1984, during an already successful career, Doris Lessing wrote and submitted for publication two novels under the pseudonym Jane Somers. She wanted to demonstrate that nothing succeeds like success and that an unknown writer was doomed. In fact, her own publisher, Jonathan Cape rejected her manuscripts, which eventually appeared in the United States.

Had Lessing submitted this book under the Somers moniker, it would no doubt have suffered a “Somers” fate, submerged under a low-level editor’s slush pile. Not because it isn’t a great book. It is. But it violates every canon of contemporary writing-workshop and self-help manual style.

Lessing does not show but tell; her own authorial feelings, the thoughts and feelings of her characters. Pages and pages are dialogue-free. The prose is direct and unencumbered by artifice. There are no clever gimmicks. There is no “hero’s journey,” no Jungian archetypes. Characters disappear and return magically. Disaster and disappointment follow with Balzacian certainty.

The result is a sprawling Dickensian novel that follows an eccentric and extended London (Hampstead) family from World War II flashbacks through 2001, when “The Sweetest Dream” was finally published.

Frances Lennox, second wife of Johnny Lennox an Eton-educated leftist workers’ hero and moocher off women is the book’s center. For 40 years, Frances cooks and comforts in the Hampstead house where Johnny grew up and later installed her with his mother when he went off with woman No. 3. The house collects an assortment of children, step-children and hangers-on who live the 1960s to their self-serving fullest. Lessing skewers left-wing sanctimony following it to its most destructive end in Africa.

All through it, Frances struggles and cooks and solves problems — everyone else’s. Despite the overwork and bewilderment, her own growth and increasing common sense are the emotional center of the book and the source of the reader’s love and admiration for a woman who contains a bit of us all.