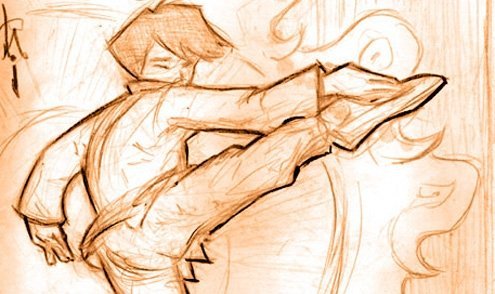 They murmured things about energy, cosmic frequencies and a trip to India.
I

signed up for a Tai Chi class after reading that it helps prevent Alzheimer’s disease. My father has Alzheimer’s and I see worrying signs of it in myself. I also wanted to get in shape.

At the gym, the receptionist welcomed me to this “esperiènza alternativa.” My red-pajama-clad classmates cooed happily when she introduced me as a music teacher.

Lights dimmed, sitar music twanged. They murmured things about energy, cosmic frequencies and a trip to India. The word chakra came up several times. I wished I hadn’t already paid.

Before we started, the teacher, a whispering girl with a wan smile, led me to the front of the classroom. This made it easier to follow her demonstrations but harder to sneak out the back exit.

I glanced at my classmates. They looked unhealthy and rigidly round shouldered. Some were flabby and bony; some were flabby and fat. The teacher, round as a Buddha, might have been pregnant but was probably just lax around the middle. It would be difficult to find such a muscle-less group in any random cross section of the population.

A glimpse in the mirror revealed that I was as flabby as the rest of these couch potatoes. But I hadn’t been doing years of Tai Chi. That was the point. I was the Before; these people were allegedly the After. So much for getting in shape.

The lesson began: The first exercise consisted of standing still, hands cupped in front of the belly button, thumb tips touching. That was it. No one moved. When I turned to see if I was missing something, the teacher’s face grew stern. Everyone stared ahead. There was no sound: no music, no ohm, no posture straightening, no weight shifting, no deep breathing. We stood there minute, after minute, after long minute. I wanted to check my watch but feared the motion would jar the atmosphere.

Finally the teacher sang a little ting-a-ling doorbell melody and one hand slowly rose above her head. What a relief! We all did it. The other hand moved slowly downward, as slowly as is humanly possible without stopping. Then we returned to the belly button position and stood there. It was finished. We waited. I found my hand position degenerating into a thumb twiddling waiting-for-the-tram pose. It was unbearable. Why wasn’t there a clock?

I tried mentally counting the seconds, then the minutes. Counting had helped me endure the pain when I was giving birth to my children but that was because I knew how long each contraction would last. This was like Chinese water torture. One drop striking your head did nothing but the repetition, into infinity, could drive you insane. It was the torture of time.

Tai Chi is a martial art but I perceived nothing martial in these limp movements. The receptionist had said the Tai Chi movements were like poems, each one beautiful. I saw no beauty but maybe this was a warm up — not that it warmed anything up. There wasn’t much blood pumping in this room.

The lesson continued. There were three sequences of movements, all slow and all returning to the belly button position. The last one was quite complicated. I had trouble remembering it. Could this be mental, Alzheimer-preventing gymnastics?

Once, I got up my courage and whispered, “What’s the purpose of this?” The teacher, offended, answered, “Releasing the energy of our superior self.”

I don’t have a superior self. As for releasing energy, I felt pent up to the point of exploding. I thought I’d be able to do Tai Chi only if I got Alzheimer’s — only if each moment existed in isolation, without remembering the preceding one or anticipating the following one.

When I talk to my father, we repeat the same conversation. By now we’ve had it hundreds of times. I try to engage myself in it the way he does — as though it’s the first time. I know my father won’t be with me much longer. Someday ‘’ll be reliving this conversation in my memory.

It’s the same with music. Each time you perform a Chopin Ballade, you must play as though it’s the only time.

That is how I got through the belly button poses in Tai Chi. I closed my eyes and imagined music.

I clearly haven’t understood what Tai Chi is about. The receptionist regretted that she couldn’t refund my money. She suggested I try again, through Tai Chi movements, to recalibrate the light of my multidimensional self. I declined. I need an esperiènza alternativa, something più vivace.