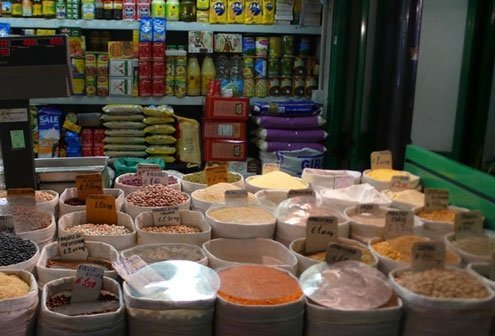 The Piazza Vittorio market is rich in Indian and Chinese products.
W

henever it comes to getting ingredients for exotic cooking I always make a shopping trip to Rome’s Piazza Vittorio, located in Esquilino, one of city’s oldest neighborhoods, or rione. In ancient times, hardcore Romans considered this northeastern part of the Esquiline Hill (among the city’s fabled seven hills) as a suburb.

“Esquilinae” in fact derives from the Latin root “ex-colere,” with the “ex” intended to make it clear that its residents dwelled “outside,” as “exquilini,” and were not inhabitants of imperial Rome. It’s similar to the distinction Romans still apply to outsiders (provinciali).

Piazza Vittorio Emanuele II was completed in 1873 and is lined on all sides with porticos, the biggest of their kind in Rome. Widespread in northern cities such as Turin, the porticos, or arcades, were introduced in Rome after Italian unification to give the capital a more modern and monumental flavor, while improving the mobility of the city’s population, which at the time was booming.

These days the piazza is synonymous with multiculturalism, immigration, integration — and marginalization. The neighborhood’s proximity to the city’s Termini train station has made it a popular settling place for ethnic groups, particularly the Chinese and South Asian communities, including Indians, Sri Lankans and Bangladeshis.

Early on Saturday mornings I often hop on my scooter and make for the large covered market on Via Principe Amedeo, just behind Piazza Vittorio. The market’s outer layers contain stalls of fresh vegetables from Italy and elsewhere. Deeper in you find spices and an array of Indian and Chinese products. There are also stands with Italian meats and cheeses. At the center of the market are fish stalls.

Most of the counters are Italian-owned but run by immigrant workers, giving the market the flavor of a souk, a Middle Eastern market. Shouting vendors hawk their products. The few Indians who speak in Roman dialect are the exceptions. Most vendors struggle with Italian. Vendors from the subcontinent are pleasant, even sweet, and often speak with a lilt. “Si signooo, questi sono buonissimi, freschissimi e bellissimi… (“Yessir, they’re are delicious, fresh and beautiful…”). I call them the super-optimists. The Chinese, meanwhile, have their own Italian diction, using infinitive-form verbs and making Rs into Ls, as in: “Volele tu Tofu? Ok 2.5 euo….Plego.“

I usually make a run through the market before deciding what to buy. It’s a scouting trip in search of the freshest produce. It’s harder when it comes to buying fresh fish, which takes close attention and time.

If you’re looking for bargains, wait until just before the market closes (Monday through Saturday, 7.30 a.m. to 2 p.m.). Prices plunge as vendors try to sell off their remaining goods. If you’re patient enough you can find “Black Tiger” shrimp at €5.50 per kg.

I often leave home with a specific recipe in mind only to find my best laid plans turned upside down by the intriguing foods and smells of that day’s market offerings.

When it comes to Chinese products, I have a weakness for a store run by nice Chinese family and located directly under the Piazza Vittorio portico (Piazza Vittorio E. II, 34). I’ve been shopping there for years and prefer it to the market for its quiet, oasis-like qualities. The store is my headquarters for soy sauce, tofu (soft and hard), bean sprouts, fish sauce, seaweed, miso, green tea and Thai products. Prices are low, and the lady at the counter will help out if you don’t understand the labels.

Another favorite is the Selli International Food Store (Via dello Statuto, 28), which sells spices, cereals, pickles, sauces and herbs from India, Sri Lanka, Thailand, the Philippines, Indonesia, the Middle East and South America. It also has an excellent selection of organic products.

A few steps away (Via Merulana, 271) is the Shawarma Station Oriental Grill, where you’ll find the best kebab in Rome. A friendly Egyptian who specializes in all kinds of Middle Eastern dishes runs it. Sometimes I buy fresh hummus and take it home to my wife, who loves it.

Once, while eating a fresh falafel, I saw the Egyptian owner locked in a bitter disagreement with what looked like an Indian. As the Indian walked away from the grill, the owner chased after him, shouting “Extracomunitario!”, the hard-edged Italian expression for a non-European Union citizen.

“But you’re also an ‘extracommuntario‘,” I pointed out, laughing.

The Egyptian smiled, and in a thick Arab accent replied flawlessly: “I’ve been Roman for a generation.”

— In a wok or a large nonstick skillet, heat sesame oil with the chili pepper and garlic. Once the garlic turns golden, remove it. On high heat, brown the chicken until golden. Remove the chicken from the wok and set it aside.

— In the same wok, heat sesame oil and sauté pepper, shallots, mushrooms and almonds. Add the browned chicken, and after a few minutes add the sweet and sour sauce.

— Finish up by stirring in the lemongrass slices and chopped coriander. Serve the chicken with steamed basmati rice.

— As for wine, I go for ice-cold Prosecco di Conegliano.