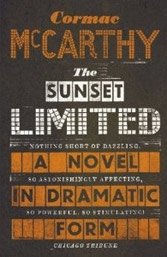 McCarthy’s 2006 novella-play takes place entirely in New York City tenement room, where a once-violent now reverent ex-con, Black, tries soothing a highly-educated, depressive professor, White, whom he’s just “rescued” from a train-jumping suicide attempt. In McCarthy’s take on Sartre’s “No Exit,” death is the Sunset Limited and life’s purpose the subject of the two-man repartee, a chess game with a built-in crescendo. Black tries mightily to reel White (“a professor of darkness…”) back from his brink by advancing the value of kindness, compassion, and by equating Jesus not to a man but to a folksy feeling, “… the pure ore. That forever thing.” … “…that gold at the bottom of the mine.”

For Black, White’s loathing of self and world is presumptuous — “… your pain and the world’s pain are the same pain…” – and based on mistaken priorities (“I believe in the primacy of the intellect,” insists White). The verbal chess seems briefly to “favor” gentle Black, “a dumb country nigger from Louisiana…” for whom Jesus is a lamp. Black shrewdly ties White down with food and debate.

Until antsy White, desperate to escape his “abyssal pit,” fires back a non-believing cannonade as starkly illuminated as anything in McCarthy’s Western fictions. “The one thing I wont give up on is giving up,” says White. Religion is a sham that imbues nothingness with meaning and promises more life, ensuring only further futility. People — again shades of Sartre — are little but loathsome. A life without make-believe, which life lobotomizes, makes a “train, a wall, a world…” mere shapes in a “howling void” whose antidote is an escape into “nothingness.”

Though McCarthy caresses metaphor (“Black” and “White”) and parable (Black is an angelic figure), this is a short day’s journey into night that gives White’s suicide vision the clinical clout of 10 locomotives.