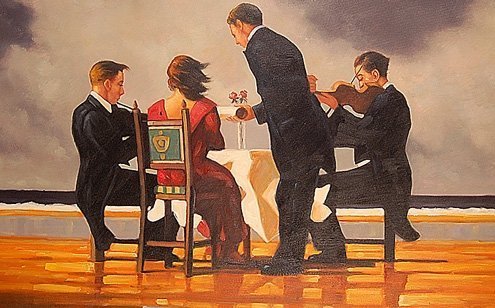 Expect a few more at the table for la vigilia...
A

s an Italian-American, I grew up with traditions my southern Italian-born grandparents brought to Boston’s shores in the 1930s. Like many prewar American immigrants, they adjusted home recipes to the available ingredients, a tinkering process that eventually led to a host of Italian-American dishes that have remained frozen in time.

For many Italian-Americans, Christmas Eve is the year’s dining highlight. In the Italian south, la vigilia is best known for the Catholic Feast of Seven Fishes. In our home, the no meat rule extends to red sauce, red seafood and fish shells (including lobsters, crab, tuna).

Though the feast is part of a fast, it’s also a triumph of Italian dining decadence. Some families serve courses into the teens. We’re a more modest bunch, limiting ourselves to seven courses to represent the seven sacraments. The religious symbolism is an afterthought to a yearly event that gathers family and friends around copious amounts of deliciously simple food and wine.

In my youth, my maternal grandparents — the Pompeo-Aliberti family from Campania — ran the show, and it was a big one (as many as 70 people showed up, including aunts, uncles, cousins — and the plumber). Starting at 2 p.m., family and friends trickled in and out of the Aliberti kitchen for an aperitivo.

They kicked off the “evening” with holiday toasts and tributes to the year gone by. Caramel-hued brandy was versed into snifters. Intoxicating scents of battered shrimp sizzling in oil intermingled with the pitter-patter of children’s feet, laughter and clinking of glasses. Red wine was always at the ready in a jug by Papa’s feet. Rose-colored patterns and oil stains speckled the white-pressed tablecloth long before the pasta course graced our bowls. My Scottish great aunt Joyce always brought along her beloved pinot grigio.

Casa Tringali of the 21st-century goes about things in much the same way. Prep is already well underway by the 24th. The salt-cod is soaked in water and the anchovies desalted. I play sous chef and joyously pair wines for the fishy marathon.

The nice thing about our seven Christmas Eve dishes is that they’re good all year round, no feast required. While it’s not a bad idea to keep some of food and wine pairings in mind, my “rules” are meant to be broken. Drink what you love.

I’ve tried keeping my wine pairings simple, using southern Italian wines (red and white) and one beer. What grows together goes together.

Battered and fried shrimp and smelts • Fried foods such as shrimp and smelts are sweet and fatty. Sparkling wine suits the occasion and also helps cut the fat through carbonation. I recommend Sicilian Benanti NV Noblesse Brut Metodo Classico (12.5%); €22.

Roasted and marinated capitone (eel) • In our home, Christmas Eve without eel is a sacrilege. It’s the most traditional of the seven dishes, meaty, succulent and oily, both sweet and savory. My grandparents served it with red, but I suggest trying it with Vesuvia (7.5%); €10, a strong ale from Birra Maneba. The ale’s robust malt character and crisply intense flavor enrich the intensity of the smoky, savory eel.

Baccala salad with olives and vinegar peppers • Salt cod and vinegar peppers need a white wine with enough attitude to stand up to the tangy vinegar marinated peppers. I recommend Frank Cornelissen’s MunJebel Bianco Classico (13%); €32. This intensely robust white wine says, “pay attention” in ways I appreciate. It’s often referred to as an orange wine because it’s made with white grapes whose skins are left on during part of the production process (standard whites are made without peel). The skins increase tannin, giving the wine a golden orange color. Orange wines are on the sour and nutty side, so lovers of the floral and the fruity should steer clear.

Seared scallops • My favorite for scallops hails from the tiny Aeolian island of Lipari. Tenuta di Castellaro’s Pomice Bianco (13.5%); €22 is a vibrant, mineral explosion with floral aromas and salinity, a delicious counterpart to the mild and meaty seared scallops.