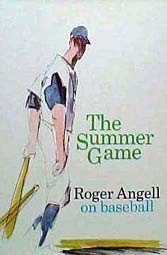 Angell makes the sports passion of the common man literate. “The Summer Game” is a compendium of essays he wrote for The New Yorker over a 10-year span (1962-72). Together, they read like nine seamless innings. While watching a doubleheader between the Baltimore Orioles and the Boston Red Sox in 1968 (at Fenway, “the Taj Mahal of New England”; the Sox of Carl Yastremski, the Orioles of Frank and Brooks Robinson), Angell considers which kind of baseball he likes best, taut games or loosey goosey ones: “Then I remembered I didn’t have to choose… I felt what I almost always feel when I’m watching a ball game: Just for those two or three hours, there is no place I would rather be.”

It comes through in the writing. “Young and alert and open,” he writes of the 1969 Miracle Mets, “they are above all suggestible…” Suggestibility and impressionability don’t usually inform a sportswriter’s jargon-laden sensibilities, but Angell’s suitcase is more ample, with folds, layers and pockets.

He was also well ahead of the curve. Some say pitch counts, the annoying tendency to spare pitching arms by limiting starters to six innings, is an invention of the computer age. Not so. “Young pitchers arms are so fragile, so suseptible to permanent injury,” he writes in a 1971 essay, “that many clubs have various self-imposed rules to protect them… One team limits its youngsters to a maximum of 100 pitches per game.”

Great names limber across the lawns of this book: Mays, Marichal, Gibson, Kaline, Seaver, but it’s the writer that greens the grass time and again. “Of all sports, none has been so buffeted … so maligned by contemporary cant, or so indifferently defended as baseball. Yet the game somehow remains the same, obdurately unaltered and comparable only with itself.” Angell is himself incomparable.