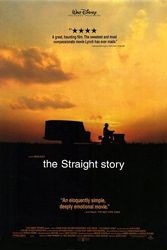 David Lynch’s change-of-pace tells of life’s beauty and oddities using a literally straight story — how 73-year-old Alvin Straight made a 260-mile lawnmower trek through the American Midwest to visit an ailing brother.

Deft and humane, funny and sometimes absurd, this is no “Wild at Heart” or ”Mulholland Drive.” Straight lives in tiny Laurens, Iowa with his daughter Rose. She’s sweet but slow. Alvin, meanwhile, has poor vision and walking canes. But when he hears that his brother is dying in Wisconsin (they haven’t spoken in years), he decides to pay a visit. All he’s got to travel with is his dilapidated tractor mower. The neighbors and Rose think he’s crazy, but Alvin takes off anyway.

This is Lynch’s humblest work, an unsentimental look at humanity, neighborliness, heartbreak and forgivenesss. Sometimes grilling sausages by the side of the road — few words spoken — says it all. Farnsworth, who received a Best Actor Oscar nomination for the role, died in 2000.