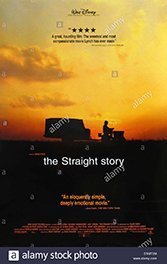 David Lynch is often labeled one of American cinema’s great surrealists, to the extent that the term “Lynchian” is now often used in popular culture in response to particularly experimental filmmaking. From his 1977 debut, “Eraserhead,” Lynch’s films often exist in a space in between reality and dream, a purgatory in which characters feel trapped within their greatest fears. So, imagine the surprise when, in 1999, Lynch released the Disney-produced “The Straight Story,” an entirely straightforward tale based on the true story of Alvin Straight, an elderly man who, unable to drive a car, traveled 240 miles on a lawnmower in order to revive ties with his estranged brother.

It’s understandable that many would be confounded by Lynch’s decision to take on such a small scale, sentimental project given his credentials, but there has always been more to Lynch’s vision than just surrealism: chiefly, his empathy. “Eraserhead’”may be avant-garde, but it’s also an intimate portrait of a man’s anxiety over becoming a parent. “Wild at Heart” is a trippy Neo-noir about lovers on the run, but its foremost concern is always the young couple’s enduring love. Given this context, Lynch’s desire to tell the heartfelt story of an unbreakable bond between siblings hardly seems so jarring.

Even with Lynch behind the wheel though, this is a tale that could easily become mawkish, and it’s largely to the credit of Richard Farnsworth’s lead performance that it never falls into that trap.

This in fact was Farnsworth’s final film role and you can almost tell that he knows it. Every one of his meditations on growing old and coming to terms with mortality feels genuine if not autobiographical. Lynch ensures to glorify the man; he’s done right and he’s done wrong. It’s a life neither wholly happy nor wholly sad, but it’s truly a life lived, and every year of the actor’s life is etched into the character’s bones.

It’s hard to imagine a more perfect end to an actor’s career than this one, and it’s just as hard to picture anyone other than Lynch dictating the pace. As Alvin rides his mower through vast rural landscapes, the setting sun behind him, there’s a sense director and actor are in perfect harmony. Few films reach such heights of affection and admiration, and together these emotions make for a remarkable whole.

It’s worth noting Lynch’s involvement in another veteran actor’s swan song, that of 90-year-old Harry Dean Stanton (who appeared in “The Straight Story”) in 2017’s “Lucky,” yet another idiosyncratic ode to a life in its twilight.