The Story of My Teeth 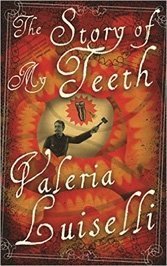 By Valeria Luiselli, translated from the Spanish by Christina MacSweeny

Mexican Valeria Luiselli has written an overly ingenious first novel that’s far and away too precious for its own picaresque good. The surreal tale, such as it is, regards one Gustavo Sánchez Sánchez, a.ka. “Highway,” a one-time security guard turned auctioneer determined to replace his grotesque teeth with an improved set, which he accomplishes for a time by getting a hold of Marilyn Monroe’s and implanting them into his impoverished if loquacious mouth. This lasts only until son Siddhartha “an ambitious rat of the worst sort” thieves them out, leaving poor Gustavo to start his dental autobiography from literary scratch. All this after good-natured Gustavo has been conned into overseeing an allegorical auction that includes bidding on “ideas as objects,” with Doug Aitken, Margo Glantz, Unamuno, and Luiselli herself in the sales pitch mix.

This slapstick mastication is a cover story for a rich riff on writers, writing and wave after frothy wave of zany intellect intended to prove that Gustavo is, 1. A barely-of-this-earth eccentric who believes in “postcapitalist, radical recycling auctions” intended to “save the world from its existential condition as the garbage can of history,” 2. A walking metaphor on loan to the highest literary bidder, and 3. A foil at Luiselli’s disposal to show the world that she’s read a lot of classical and contemporary literature, been in the presence of art, and is brimming with ideas. Overkill aside, she can seem in whimsical tradition of César Aira (who’s also “sold” in the allegorical auction), but without the conviction it takes to mold her slapstick allegory into a story. “I am my ideas and my many voices,” she seems to say, “bid for me.” Eventually, though, the ideas begin cluttering the room. Sifting through them grows tedious, all the more so when you consider that an auctioneer is ultimately an embellisher, a liar, a master of ceremonies out to sell you something — and that Gustavo and his advocates won’t quit.

Luiselli brings great ambition to her high-flying semi-comic efforts, too much in fact. How else to account for an entire “creative” chapter concocted (with Luiselli’s approval) by translator Christine MacSweeny to give Gustavo’s convulsive life and times a kind of arty timeline. A child of the 1980s, Luiselli calls her book “a collective ‘novel-essay’ about the production of value and meaning in contemporary art and literature.” A less charitable way of looking at it would be as a well-intentioned mess, or, as Gustavo says at one point about his own story, “…I become confused and agitated and lose my way.” Indeed he does.