The Story of a Brief Marriage 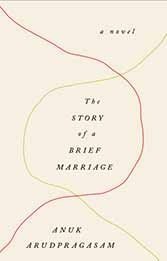 At first blush, Sri Lankan writer Anuk Arudpragasam’s debut novel is the simple story of young man trapped in a jungle holocaust — the recently ended Sri Lankan civil war — whose scope defeats his comprehension. The young man is Dinesh, a Tamil whose daily life near a makeshift hospital and refugee camp consists of surviving from one shelling to the next, each time helping to dispose of corpses while “unable to believe in the reality of all the truncated limbs.” Years of flight and bombardment have transformed him from a man into an emissary of survival, more of an anatomical essence than a creature of firm volition.

Amid all this, Dinesh is asked to wed Ganga in an informal arrangement drawn up by the young woman’s father as means to bring one aspect of a careening world to order. Dinesh must now include reluctant bride Ganga into his otherwise shell-shocked solitude. Her introduction unexpectedly exposes him to the possibility of loss even greater than what he’s mapped out.

Inside him is a calloused, visceral ache that places him mostly outside hope’s reach — “though he had been alive for some time it was difficult to remember whether it had meant being together with other humans, or being alone with himself above all.”

Arudpragasam’s firm but delicate prose gives Dinesh’s pained displacement an organic texture, like the wrinkled skin of some ripe fruit. Whether he’s cleaning himself or peeing, his actions give off a hallucinogenic, participatory feel. He is a thinking particle in a dismembered world — “the dusty, windy, violent earth” — that exists to await bereavement.

In Ganga’s company, he attempts to contemplate new meaning, and even countenance optimism, “a purpose he could never identify but which he waited for nevertheless with yearning.” But in the end “two humans crossing paths in a lifeless and empty land” have that same land to answer to. “What is there to be happy or sad about?” Ganga asks Dinesh when he attempts to seek comfort in her intimacy. “Things just happen and we have to accept them.”

This is a superior work of fiction and poised rendering of unimaginable sadness.