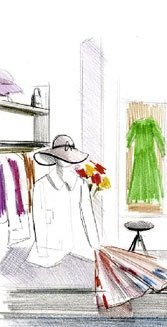 Feminine but not prissy.
L

ast night I went to a cocktail party for Imarika, my friendly corner dress shop. The Bevilacqua family who owns Imarika invited clients, designers, friends and family for an evening of food and jazz at Milan’s Villa Necchi-Campiglio.

Imarika entered my life about 20 years ago. A few stolen minutes at their windows were contact with the store of my dreams. Its minimalist concrete and glass shelves were ahead of the design curve and the colors of the clothes snubbed fashion-industry schemes. The style was feminine but not prissy, intellectual but not weird, and timeless but not classic.

We were just starting out in Milan then and Imarika was a bright spot on trips to the Esselunga supermarket that involved two trams and a baby carriage bending under offspring and shopping. I even ventured inside once in those early days.

But the intimacy of this female world unnerved me; I was too fresh from the anonymous American department store. And everything was way, way over our starter family budget.

Ten years later, I ventured in again and this time left with a coat created by Milan designer Daniela Gerini. With a flattering princess cut, it was long black, and severe. My children christened it the “Matrix” coat, in honor of a Piccadilly passerby’s appreciative comment. It cost a million lire. We had prospered.

Something that made me feel like a princess for a decade was definitely worth it. So I bought more. A yellow taffeta Gaultier jacket was another princess-maker/budget-killer. I have amortized it over at least three weddings, two 50th birthdays and many compliments.

Then there’s the blue Mary Poppins Comme des Garçons suit, whose fitted, high-collared jacket I wore to the Villa Necchi party (with a tulle skirt and glittery brooch). This wacky-skirted wonder has sprung from my suitcase in Dushanbe, Paris and Porto, as tireless as the contents of Mary Poppins carpet bag.

At the party, clothes known only on hangers came to life. Items I’d lost through delay and indecision returned from oblivion. A beloved Gerini dress of Fornasetti fabric that looked terrible on me had found better home on someone else.

Imarika style transcends fashion and I’m not the only one with a long amortization schedule. Many older items still looked current, including the purple velvet version of my Matrix coat. Personal creativity was much in evidence. There was a elderly lady in a old green Miyake skirt which she’d paired with a plaid Comme des Garçons jacket from last season adding tailor-made green silk party shoes from her son’s wedding.

Dressing with a capital D requires a practiced hand on the tiller of style. Fashion-mag amateurs and luxury brand slaves are advised not to try it at home.

In the store, clients share a code of honor regarding lingerie not intended for public view. The tussles of zippers, buttons and extra kilos are kept out of sight. Discretion is another capital D.

But at the party reserve melted away. Strangers met and talked without introduction, a rarity in Milan. I shared a table with a man who told me how to grill piranhas and met a woman who shares Anna Wintour’s Milan hairdresser.

The son of one of the founders, a philosophy student, spoke about the meaning of gratitude. His family wanted to thank us, he told us.

We the clients wanted to thank them too. For making us look and feel our best at weddings, jobs, dates, bar mitzvahs. For tending to us when we got fat, thin, married, had babies and divorced.

As I pedaled home from the party, I recalled the stinging words of an adored professor, who worried about my apparent lack of ambition and the risk of squandering my intellectual potential. “If you aren’t careful,” she told me, “you will end up owning a ladies’ store. However special you make it, it will still be a ladies’ store.”

She needn’t have worried, I found the Imarika ladies.