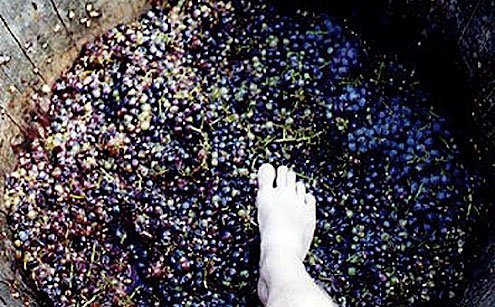 It takes 100 pounds of grapes to make seven gallons of wine.
T

hanks to the magic of cinema, I think anyone who has had more than a passing interest in wine and winemaking has recorded an image or two, be they romantic or comical, of stomping grapes the old fashioned way.

The menfolk I know seem to recollect an earthy donna with smouldering eyes, come-hither hips, and a bit of tempting thigh peeking out from under a voluminous peasant skirt á la “A Walk in The Clouds.” My own image is a bit more comical and is firmly rooted in the equally unbelievable image of Lucille Ball happily dancing her way through a vat of pulpy fruit before eventually ending up as purple as a grape in a brawl worthy of WWF wrestling.

While both of these images lack a strong dose of reality, they each have common roots in what is still a romantic mystery to most of us. Just how does that ruby red liquid, so mesmerizing in its own right, get inside those fancy labeled bottles?

It’s true that once upon a time one could find naked tootsies squish squashing grapes in all manner of tubs and vats. Interestingly though, the juice released by the grapes, be they red or white is actually almost colorless, so Lucy in all her black and white implied purpleness would never have looked quite as Technicolor as our imaginations have led us to believe, even if the notion of a purple redhead makes for a more sentimental storyline.

The idea behind stomping was to gently break open the grapes to release their juice without applying undue pressure to the stems which can lead to unwanted bitterness and astringency. Feet were a handy solution, gentle and padded even if the person whose body they were attached to had less than enviable hygiene. But reality intrudes and we learned quickly that it takes approximately 100 pounds of grapes to make just seven gallons of wine and stomping a whole field of grapes is a slow and tedious process, when it becomes an all-day affair and not just a wine festival photo opportunity.

Modern day wine production calls for the use of crusher-destemmers, a relatively simple device that is as gentle as feet but can process loads of harvested grapes at a snappy pace, essential to for wineries producing vintages destined for supermarkets and wine shops. After picking and sorting, grapes are loaded into hoppers where they are then carefully broken open, separating the berries from the stems. These pieces are called “must,” which, in addition to grape juice includes pulp, skins, seeds, and sometimes, though in only very small quantities, stems. These solids, called “pomace,” are necessary ingredients for developing the character of the wine and also give wine its signature ruby coloring.

In the good old days, fermenting occurred in large wooden vats, though today throughout Italy we see all manner of containers, from buckets and pails used in home vintages to industrialized, food-grade plastic tubs, steel tanks or even concrete vats. The juice and must are poured into these containers and the magic of yeast and fermentation begin working their mysterious magic with a little help from the winemaker.

As yeast converts grape sugars into alcohol, the entire mixture begins burbling. The seeds settle at the bottom of the vat with the lighter grape skins floating to the surface. This “cap” of skins can be as thick as 20 inches, and if left alone becomes solid enough to stand on.

But it’s extended contact with the skins that give wine its color and character. Winemakers plunge this “cap” back into the liquid, often several times a day, in a process known as “pigage.” They use rakes or plates so that more color, tannin, and flavors can be extracted.

Some of the bigger wineries have machine-automated this proces, though most smaller producers still do it manually. You can even find a few vineyards working in the traditional way, using hand-punchdowns or even skinny dipping through the solids.

Sounds to me like the world’s best one-day job, though I don’t think I’d want anyone filming me as Bacchus.

In the end, when all the sugar has been converted to alcohol (a process that varies in length from several days to several weeks), the precious grape juice has turned to wine and is gently pressed off the skins. It is then stored in steel tanks or oak to be aged and filtered, bottled and sold.

The next romantic image comes in the form of a cork popped and a glass poured.