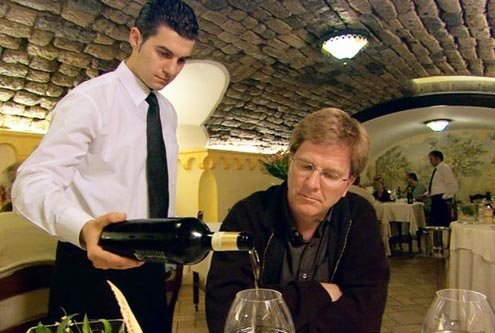 Maybe Rick Steves readers would prefer to spend their days drinking and browsing shops.
I

t’s official: I have a beef with Rick Steves. It all started when my mother came to visit bearing a Rick Steves guide that covered Naples and the Amalfi Coast. In it, the travel guru advised visitors to base their southern Italy trip in Sorrento and take day trips to other less glamorous locations, including Naples.

Needless to say, I thought that was the worst advice I’d ever heard. If seeing all of Naples’ highlights in a day is impossible, so is staying entertained in Sorrento for more than about four hours. (Usually, the place is overrun with tourists chasing down overpriced pottery clutching Rick Steves guides to their chests.)

At first I attributed the disagreement to contrasting travel preferences. Perhaps the people who read Rick Steves would prefer to spend their days drinking and browsing shops in Sorrento instead of obsessively visiting Naples’ churches and museums (or even admiring the superior views from tourist towns further down the coast). Fair enough.

But then, a few weeks ago, I stumbled across something in which Rick Steves just went too far.

Searching for Naples information on Google, I was directed to Rick Steves’ site. Moments later, I was sitting with my mouth open in disbelief, reading his website disparage the city’s Museo Archeologico Nazionale (National Archeological Museum) — the same museum that made me fall in love with the city five years ago.

Go, he says, “if you can overlook the dust bunnies.”

Seriously, Rick Steves? I think I’ve been to the museum probably 10 times by now, and don’t recall ever seeing dust-bunnies, or noticing “how ramshackle, unkempt, and dumpy its displays are.” On a recent visit, I actually remember noting how all the major pieces now have audio-guide segments not to mention informative descriptions in English. (I wish I could say that for the labels at Florence’s Palazzo Pitti, where recently I felt like I was on a scavenger hunt for the many treasures contained inside — and, after finding them, had only vague memories from college art history classes to guide me.)

At this point I’m led to wonder if Mr. Steves (or whoever writes the content for his website) has actually stepped into any other Italian museums, which typically lack the extensive labeling and color-coded, whiz-bang graphics of their American counterparts. That’s the case with some of the most popular museums in Italy, including the Vatican Museums in Rome and the Uffizi Gallery in Florence.

In fact, some of the best museums in Rome, such as the Capitoline Museums, the Palazzo Massimo alle Terme and the Palazzo Altemps, are even less glossy and well-organized than the Naples museum. Often, the items in them retain a sense of being part of a private collection, and sometimes are grouped according to who originally owned them or donated them.

That makes sense, since for centuries some of these pieces were displayed in private residences or reception halls as proof of their owners’ status. Some — like the Farnese Hercules at the Naples Archeological Museum, which was displayed at Rome’s Palazzo Farnese roughly between 1545 and 1787 — were must-see items for travelers and artists during that time. Their importance and history as part of Italian culture is intricately connected to how they were displayed by great Italian families. So one might expect that they remain organized in such a way. (There are plenty of English descriptions throughout the Naples museum that help explain this, by the way.)

But does Rick Steves complain about how the masterpieces in Florence’s Palazzo Pitti basically are impossible to identify without several shots of espresso and an art history degree (or minor, in my case)? No.

Does he complain about how the Vatican Museums are a maze containing little to no explanation of some of history’s greatest sculptures? Not that I could find. No one wants to hear someone bash Rome or Florence. But Naples? Go ahead. Everyone knows Naples is dirty and “unkempt,” right?

You can praise Sorrento to the Sorrentine peninsula and back and I’ll just roll my eyes and think, “Well, everyone’s entitled to their own opinion.” But come after this museum, which holds some of the greatest treasures of Roman art (and invaluable copies of long-lost Greek masterpieces), and I have to object.

So, the next time you’re in Naples, go to the Archeological Museum and visit (or revisit) the Alexander Mosaic, the Farnese Hercules, the Farnese Bull and the Doryphoros (‘spear bearer”) inside. You tell me if you leave thinking about dust bunnies, or with the image of Hercules’ fantastically muscled buttocks chiseled into your brain.

Not to be Missed

— Farnese Hercules (a.k.a. Weary Hercules) Roman marble copy after a bronze original, circa 320 BC. The Farnese Hercules is a copy of a lost masterpiece by the Greek sculptor Lysippos. Lysippos was a star of the Late Classical period of Greek art (so much so that Alexander the Great chose him to be his official portraitist) and this is the best-known copy of one of his most famous works. When the colossal statue was displayed at the Palazzo Farnese in Rome from 1545 to 1787, it was considered an essential stop for artists and travelers.

— Farnese Bull Roman copy of Greek original from the second century BC. The Farnese Bull is one of the largest sculptural groups passed down from antiquity. The group depicts the myth of Dirce, who was the wife of Lycos, the king of Thebes. According to legend, Dirce mistreated her beautiful niece Antiope, prompting Antiope’s sons Zethos and Amphion to punish Dirce by tying her to a bull.

Make sure to walk all the way around the statue to appreciate all of its elements — it’s hard to take it in all at once.

— The Aphrodite Kallipygos (literally, “Aphrodite of the beautiful buttocks), Roman copy from 1st century B.C., from a Greek original of about 300 BC.

The reconstruction of this sculpture’s head in the 18th century has done much to contribute to its fame — Aphrodite now appears to be looking over her shoulder to admire the reflection of her bare bottom in the water. Unlike sculptures of Aphrodite bathing from the Classical period of Greek sculpture (such as the Aphrodite of Knidos), where which she attempts to cover her nudity with her hands, she makes no attempt to cover her nudity here. Instead, she displays it unabashedly.

— The Doryphoros (“spear bearer” in English, Doriforo in Italian) is a Roman marble copy of a bronze original made in the 5th century BC. Greek sculptor Polykleitos believed that mathematical formulas held the key to beauty.

To prove his reasoning, the sculptor set out to make a perfectly proportioned statue epitomizing his ideals. According to the Roman historian Aelian, Polykleitos simultaneously created another statue whose elements and proportions were dictated not by mathematics, but by the suggestions of people who visited his workshop. When the two statues were unveiled, all admired the artist’s mathematically designed version, while the other was scorned. According to Aelian’s account, Polykleitos then said, “But the one you find fault with, you made yourselves; while the one you marvel at, I made.”

— The Alexander Mosaic (Roman mosaic from the 1st century AD, copied from a Greek painting (“Battle of Issus”) of 310 BC).

Perhaps the most spectacular piece in the Naples museum is the Alexander Mosaic, which reproduces a lost Greek painting of Alexander the Great confronting the Persian king Darius III in battle. Using tiny pieces of glass and stones (called tessarae), the mosaic reproduces the painting’s subtle shadows and overlapping figures in surprising detail. In the mosaic, Alexander charges at Darius and stares straight at the king forebodingly. He maintains eye contact with the Persian king even as his spear is lodged firmly in the torso of one of Darius’ bodyguards. Darius, meanwhile, reaches out as if to ask for mercy as his army is forced to retreat.